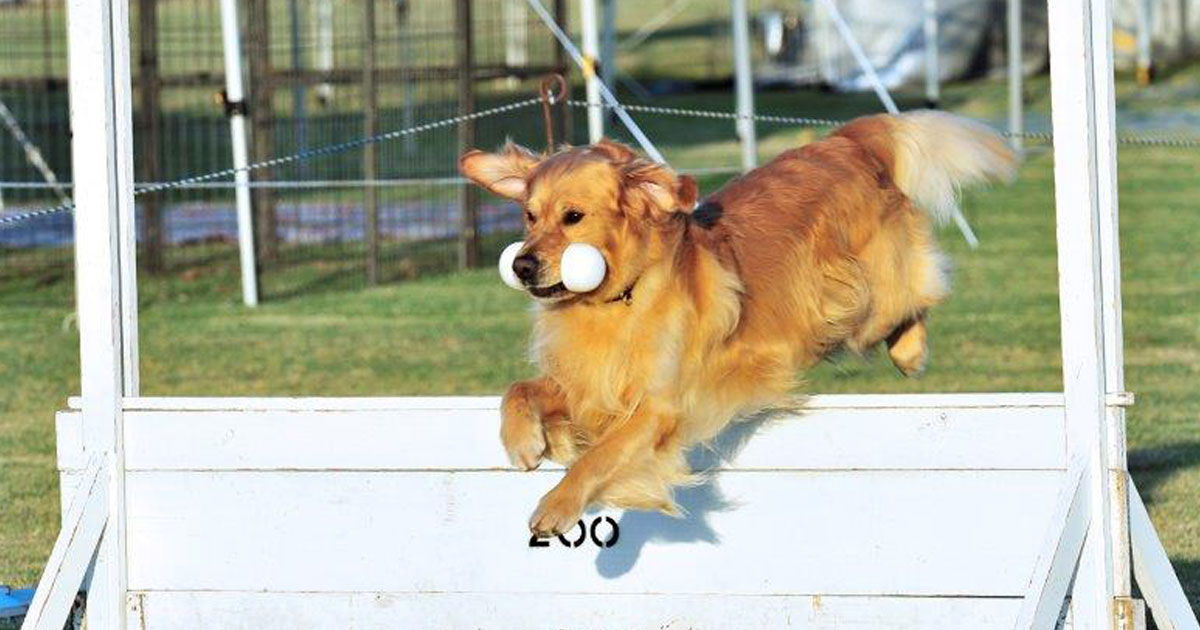 The Golden Retriever is one of the world’s most loved breeds and for good reason. They are known as the KFC dog because they’re kind, friendly & confident. They are a trusting breed that wishes only to please their owners, which in turn makes them easy to train.

Goldens are part of the Gundog group, which means they were bred to Retrieve game over land & water across long distances, then at night they would cuddle up to their owner – a hunter and they would keep each other company.  Whatever you’re doing your Golden wants to do it with you.  Goldens have a sense of humour and can get up to all sorts of funny antics.  Goldens wear a smile unlike any other breed.

The ideal owner for a Golden Retriever

Goldens are highly intelligent playful dogs that ideally suit most families.  Whatever you’re doing they want to be part of it all, be that laying at your feet while you read a book, going for a jog or playing games.  If you’re off camping or to the children’s sporting activities, your golden wants to be with you.  Goldens adore children, again making them the ideal family pet.  Remember, retriever by name, retriever by nature; your Golden was bred to retrieve game over land and water, so if there are shoes lying around the house, the odd stuffed teddy bear, maybe even a book or a remote control left at mouth level rest assured it will be retrieved.  Don’t expect to get it back the way it was left.  If however you’re a home owner that wants everything spick and span, expects to have a perfectly clean floor then perhaps a Golden Retriever is not for you.

A Golden Retriever is a highly intelligent dog that wants to please, that usually equates to a dog that is easy to train.  If you have never trained a dog before then it’s likely you’re going to make mistakes when training your first dog.  Some key things are: be consistent in everything you say and do when you interact with your dog.  Start training the day you bring your new puppy home.  Take your puppy to your local puppy pre-school, you will learn a lot!  Within a week of your puppy arriving home he or she should be sitting when asked, walking nicely beside you on a lead, know it’s name and be starting to understand that toileting is done outside on the grass.

If a Golden is left alone for long periods of time without suitable entertainment, they will, find their own.  Invariably this will be seen by their humans as destructive behaviour.  Goldens are avid gardeners and can dig huge holes in many locations while you’re at work, eating your newly planted Azalea could present a peaceful hour for a Golden while it lays in the sun.  If you’re planning on having your dog live outside most of the time and/or you spend a lot of time away from your home, then a golden retriever is not the breed for you and your family.


How much space and exercise do Golden Retriever’s need?

A Golden Retriever should be walked daily, even if it’s just to the end of the street and back.  Maybe to the local coffee shop where you can sit outside and enjoy a coffee with your dog at your feet.  Walking your children to school.  Your back yard, needs to be a proper decent sized yard, not a court house with a tiny patch of grass, which will soon turn into a bare patch of dirt and when it rains it’s your dog’s personal mud bath.  Goldens do not suit apartment living.

They have a long thick coat that sheds golden glitter 24 hours a day, so Golden owners do a lot of vacuuming.  Goldens will also have two major coat drops during the year.  One at the beginning of summer when they drop their winter undercoat and the other at the beginning of winter when they drop the light summer coat and grow one that will keep them warm in winter.  Goldens should not be shaved, as their coat is designed to keep them warm in winter and cool in summer.

Goldens require a medium amount of work for grooming, a brush with a sturdy bristle at least once a week.  When they drop coat, you may wish to use a “slicker” brush to help remove the dead/lose coat.  Toenails need to be trimmed every fortnight and the hair that grows between their toes should be trimmed back flush with the toes every fortnight.  The tail can also be tidied up from time to time.  Bathing once every 4 – 6 weeks is desirable.

When 'fowling pieces' (early shotguns) became available (to rich people) gamebird shooting became enormously popular among those who could afford it and retrieving dogs became the big movers in England's favourite dog stakes. No one wanted to have to actually go and find the bird they just shot and then bend over and pick it up, so a dog that could not only do that but also flush the birds ahead of the shooter or shooters was a very welcome addition to the outing.

England went retriever mad in the early 19th century and it was the water dogs from across the Atlantic that contributed to some of the English retrieving breeds. The lighter version of the St. Johns Water Dog of the Newfoundland type was crossed with English spaniels and setters of the day which produced a working retriever that took the fancy of Lord Tweedmouth. He bred them on his estate in Inverness in Scotland and his dogs were outcrossed to the Wavy-Coated Retriever which eventually became known as the Flat-Coated Retriever.

For a long time Tweedmouth's golden dogs were known as Flat-Coated Retriever, Golden, and was originally registered with the Kennel Club under that name. In 1911 the Golden Retriever Club was formed and the breed's official name changed to Yellow or Golden Retriever. The Yellow as later dropped.

The Goldie took its time gaining worldwide recognition. It went to Canada the land of its ancestors in 1881 and the United States in 1890. It wasn't until 1927 that the Canadian Kennel Club recognised the breed and the United States recognised the Golden Retriever in 1932. It didn't make the show rings of France until 1932 but in the middle and latter half of the century it became a global phenomenon and one of the world's favourite pet dogs.

Responsible registered breeders of Golden Retrievers will test for the following health issues:  hips, elbows, hearts & eyes.  They can also do a DNA test for PRA-1, PRA-2 (eye disorders) and Ichthyosis (bad dandruff).  These tests are done on breeding stock, not baby puppies, as the tested animal needs to be 12 months of age or more to have the tests done.  The DNA tests however can be done with a small blood sample from the puppy from birth.  The DNA tests, along with the hips, elbows & hearts are done only once in the breeding dog’s life.  Eyes however, like human eyes change over time, therefore eye tests must be done annually and be dated within 12 months of a mating.

What should these health tests reveal? The DNA tests will give a result that says the dog is either clear, carrier or affected.  Clear and carrier dogs will never show signs of these diseases.  However affected dog will show signs.

Hips and elbows are a different matter.  Keep in mind they are two entirely different joints, therefore they are “scored” differently.  The maximum score for a hip is 53, given there is a left & right hip the total maximum score is 106.  However this should be displayed as left:right e.g.  5:5 or 2:3.  0:0 is perfect.  The breed average for Golden Retrievers since the breed has been in Australia is a total of 15.  The breed average for the last 5 years (at the time of writing this article) is around 10.  Hips should be even in their scores. E.g.  2:4 or even 2:6 is acceptable, but 2:13 would be a concern.  Remember the lower the score the better.  Elbows are scores 0, 1, 2 or 3.  Like hips there are two of them and 0:0 is perfect.

Any breeder you are discussing purchasing a puppy from MUST be able to show you the original documents from the appropriate qualified vet for hips, elbows, hearts & eyes BEFORE you hand over any money as a deposit to your new puppy.

What colour does a Golden Retriever come in?

The Breed Standard for a Golden Retriever states any shade of gold, from cream to dark gold.  Not white and not mahogany.  Therefore, colours of red, white or even black are NOT Golden Retrievers.

When should I de-sex my Golden Retriever?

Golden Retrievers are large dogs that need time to grow.  Goldens should NOT be de-sexed until they have finished growing, which is usually 12 months of age.

If I de-sex my Golden before it has finished growing what are the risks?

There are many articles that have now been published that prove early de-sexing of Golden Retrievers can result in early death from Cancer.  Increased risk of hip dysplasia, elbow dysplasia and cruciate ligament damage.

What should I feed my Golden Retriever?

You should feed your Golden what you breeder recommended.  Changing a baby puppy’s diet when it moves from the birth home is highly risky.  Your puppy is likely to be slightly stressed from leaving his/her family, having a motor vehicle trip to the new home and then on top of all this you introduce a different brand of food that the baby’s poor little tummy isn’t used to having.  Stick with what your breeder reommended.

The Golden Retriever was developed by Lord Tweedmouth in the 1860’s in Scotland.  Their birth home is Guisachan.  The breed was developed to retriever game over land and water and prized for its intelligence & versatility.  A golden has a soft mouth allowing it to retrieve larger game undamaged compared to other breeds of the time.  It also had longer leg allowing it to travel further.  A powerful level moving dog that his highly athletic, with good length of neck.  It is said, that looking into a Goldens eyes and they will steal into your heart.

Golden Retriever size: Goldens are considered a large dog, weighing between 25 & 35 kilos and measuring 56-61 cm for dogs and 51-56 cm for bitches at the withers (shoulders).

Golden Retriever Feeding: Golden Retrievers are pigs when it comes to food.  Over feeding your Golden is not only a waste of your money but also detrimental to your dog’s health.

Special thanks to the The Golden Retriever Club of NSW Inc. for providing this breed information.

Dogs
** No puppies at the moment, and no litters currently planned**

Dogs
Most breeders that have this page will tell you a story about their first dog ... read more
QLD


Golden Retrievers Are The Best Cuddlers!

Did you know Golden Retrievers are one of the most INTELLIGENT breeds of them all? Watch to find out why you'll want to cuddle with these adorable smart pups forever. Post a cute cuddly photo of your pet in the comments below!

Posted by Animalist on Sunday, 4 October 2015