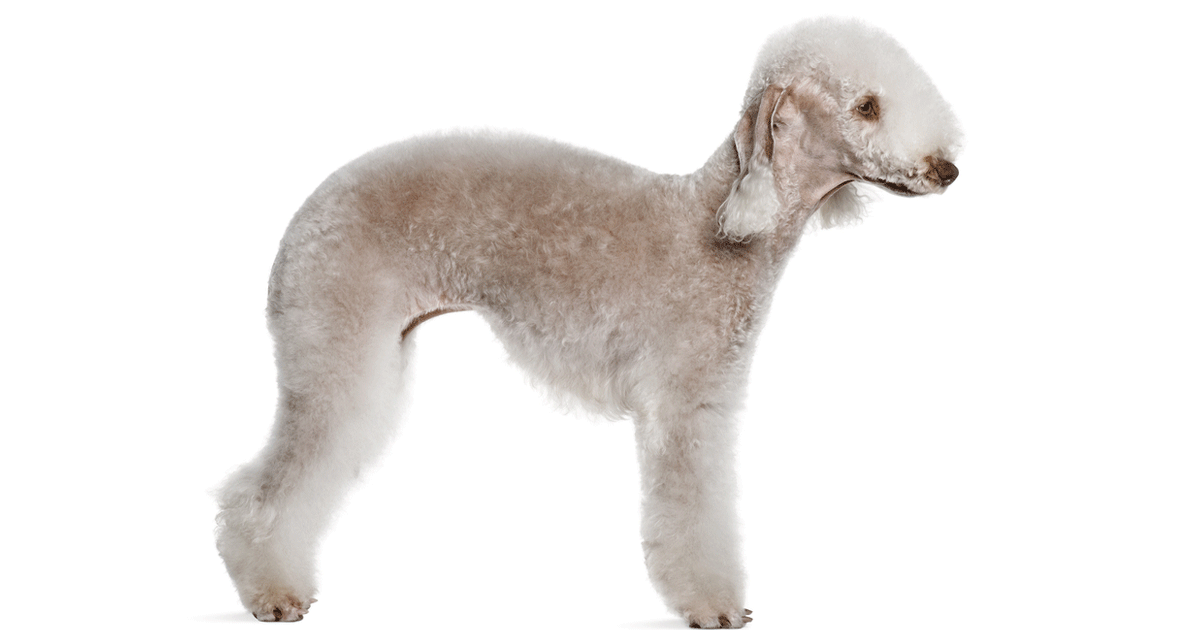 The Bedlington Terrier is a breed of small dog named after the mining town of Bedlington, Northumberland in North East England. Originally bred to hunt vermin in mines, the Bedlington Terrier has since been used in dog racing and dog fights, as well as in conformation shows, numerous dog sports, and as a companion dog. It is closely related to the Dandie Dinmont Terrier, Whippet and Otterhound.

It is described as being both good with children and "fit to kill any other dog of his weight". They have powerful swimming skills, comparable to those of water dogs such as the Newfoundland, and are noted for being very quick and having high endurance. Bedlingtons are noted for their similarity in appearance to lambs. The dogs have blue, liver or sandy colouration, all three of which may have tan points. Their fur forms a distinctive top knot on the dog's head. However, concerns have been raised about the modern Bedlington Terrier's gameness and drive to work, and the purity of its bloodlines, as some breeders are concerned that poodle may have been introduced to make the dog's coat easier to maintain.

Originally known as the Rothbury or Rodbury Terrier, the name Bedlington Terrier was not applied to the breed until 1825, but some dogs have pedigrees that can be traced back as far as 1782. The first dog shows with a class for Bedlington Terriers was held in 1870 at Bedlington. Bedlington Terriers shown at early shows were frequently dyed to improve the look of their fur. In 1948, a Bedlington Terrier known as Rock Ridge Night Rocket won best in show at the Westminster Kennel Club Dog Show. The breed has a high instance of copper toxicosis, but with the exception of eye problems, it is mostly free from health complaints.

Bedlington Terriers are extremely active and game dogs, and so stubborn they would "rather die than succumb" in any situation. Bedlingtons are sharp and plucky. Their bark has been called hound-like and has been compared to the firing of a machine gun. They are picky eaters and have been accused of being generally lazy. Fast dogs with high endurance, the Bedlington Terrier is just as quick in water as it is on land, and their swimming speed rivals that of the Newfoundland. Bedlington Terriers "have pace enough to keep up with the ordinary speed of a horse." Because of the Whippet in their lineage, they have a tendency to bolt. Their versatility has been praised, with some dogs willing to "[be] a house-dog, a gun-dog, a rat-dog, a badger-dog, or, if needed, [to] bolt a fox..."

However, both the AKC and the ASPCA call the breed "mild" and "gentle" and recommends it as being good with children. PetFinder says the breed is soft in temperament, companionable, demonstrative, loyal, and a quiet housedog. Although the breed may chase small animals outside, it is accepting of them inside. Playful and cheerful, the breed can be high-strung and excitable, and is prone to being headstrong. The New Zealand Kennel Club warns against keeping them with dogs that have dominate personalities, "as once challenged they are terrifying fighters, despite their gentle appearance", but otherwise the breed is good with other dogs.