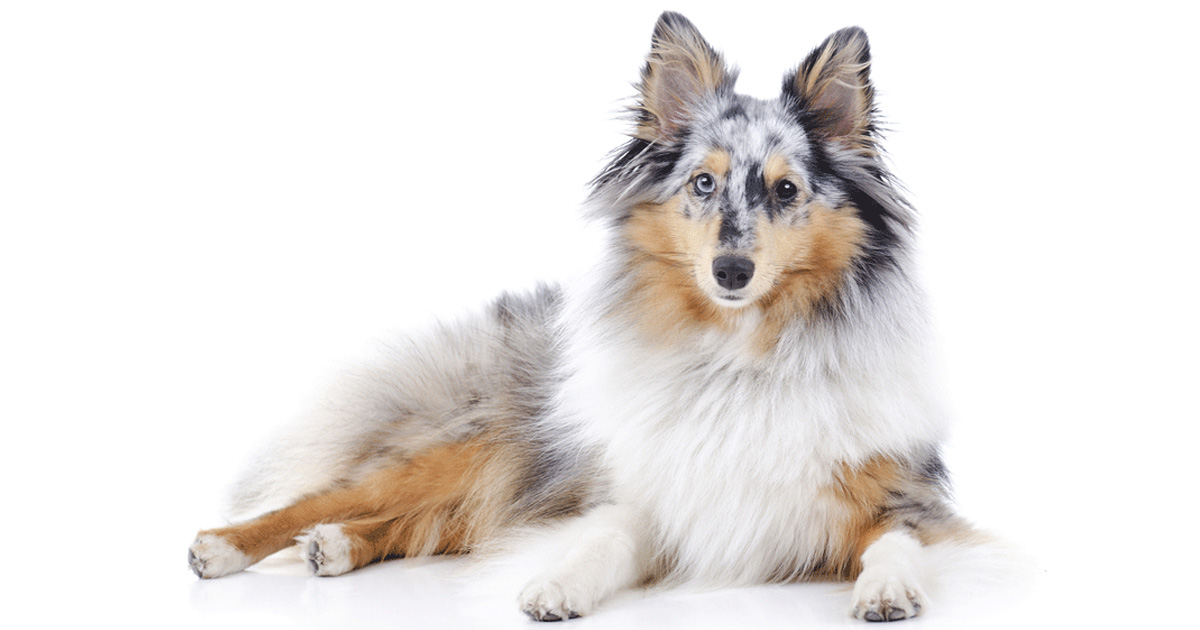 The Shetland Sheepdog, often known as the Sheltie, is a breed of herding dog. They are small to medium dogs, and come in a variety of colors, such as sable, tri-color, and blue merle. They are vocal, excitable, energetic dogs who are always willing to please and work hard. They are partly derived from dogs used in the Shetland Isles for herding and protecting sheep. The breed was formally recognized by the Kennel Club in 1909.

The Shetland Sheepdog's early history is not well known. Although of obscure origin, the sheltie is probably a descendant of small specimens of the Scottish collie and the King Charles spaniel. It was developed to tend the diminutive sheep of the Shetland Islands, whose rugged, stormy shores have produced other small-statured animals such as the Shetland pony. Today it is raised as a farm dog and family pet. They were originally a small mixed-breed dog, often 10–13 inches (250–330 mm) in height and it is thought that the original Shetland herding dogs were of Spitz type, and were crossed with collie-type sheepdogs from mainland Britain. In the early 20th century, James Loggie added a small Rough Collie to the breeding stock, and helped establish what would become the modern Shetland sheepdog. The original name of the breed was "Shetland Collie", but this caused controversy among Rough Collie breeders at the time, so the breed's name was formally changed to Shetland Sheepdog.

The Shetland sheepdog is lively, intelligent, playful, trainable, and willing to please and obey. They are loving, loyal, and affectionate with their family, but are naturally aloof with strangers; for this reason Shelties must be socialized. Shelties do well with children if they are reared with them from an early age; however, their small size makes it easy for a child to accidentally injure them, so supervision is necessary.

Shelties are vocal dogs, and are very alert to outside stimuli. The average Sheltie is an excellent watch dog. The herding instinct is strong in many Shelties. They love to chase and herd things, including squirrels, ducks, children, and if an owner is not watchful, cars. Shelties love to run in wide-open areas. Some Shelties get so excited or anxious that they perform a fast series of tight spins without chasing their tails, a behavior seen in a number of small dog breeds.

Neglecting a Sheltie's need for exercise and intellectual stimulation can result in undesirable behaviors, including excessive barking, phobias, and nervousness. Fortunately, the reverse is also true; annoying behaviors can be lessened greatly by an hour of exercise that engages the dog with its owner. They do well with a sensitive, attentive owner.

Shelties have a high level of intelligence. According to Dr. Stanley Coren, an expert on animal intelligence, the Shetland sheepdog is one of the brightest dogs, ranking 6th out of 132 breeds tested. His research found that an average Sheltie could understand a new command in less than 5 repetitions and would obey a command the first time it was given 95% of the time or better.

Dogs
I am a small breeder located in Armadale WA. occasionally have litters of both ... read more
WA