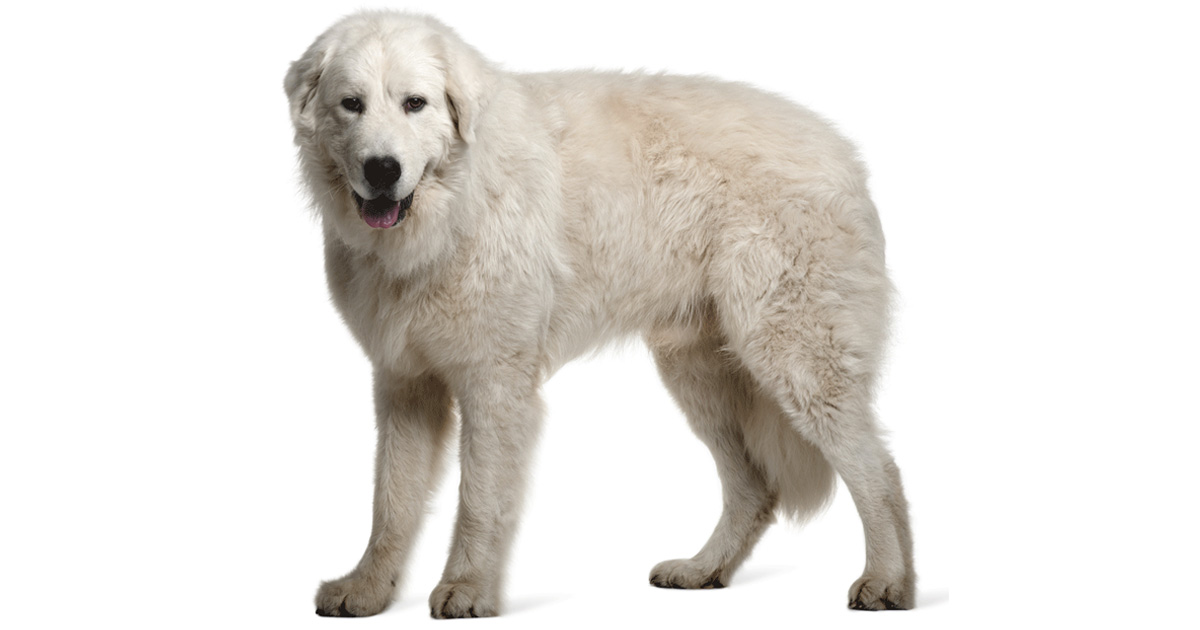 The Maremma Sheepdog, in Italian Cane da pastore Maremmano-Abruzzese, usually referred to as just Maremmano, is a breed of livestock guardian dog indigenous to central Italy, particularly to Abruzzo and the Maremma region of Tuscany and Lazio. It has been used for centuries by Italian shepherds to guard sheep from wolves. The literal English translation of the name is "The dog of the shepherds of the Maremmano and Abruzzese region". When this was translated into English to name the breed it became Maremma Sheepdog, which gives the casual observer of the name the misconception that this dog will round up a herd of animals. The English name of the breed derives from that of the Maremma marshlands, where until recently shepherds, dogs and hundreds of thousands of sheep over-wintered, and where the breed is today abundant although sheep-farming has decreased substantially. The breed is widely employed in Abruzzo, where sheep herding remains vital to the rural economy and the wolf remains an active and protected predator. Similar breeds include the Pyrenean Mountain Dog, the Kuvasz of Hungary, the Tatra of Poland and the Šarplaninac (although not white), with all of which it may share a common ancestor; and the Akbash Dog of Turkey.

Despite their large size, Maremma Sheepdogs can be good companion dogs in areas with adequate open space. Centuries of breeding the dogs to be gentle with lambs but fiercely protective of their flock has created a breed that will bond to families and show a calm, intelligent disposition. However, the dogs may display hostility towards outsiders and they are not suitable companion dogs for urban areas due to their large size and need for open space. These dogs bark as a normal part of their guarding duties and this creates problems often with owners on small holdings or keeping a maremma as a companion in a populated area. A farm type environment works best, away from neighbor's property lines and road traffic. In this environment, a dog house is not necessary because the dogs prefer to sleep with livestock.

Maremma used as livestock guardian dogs are introduced to sheep flocks as puppies so they bond to the sheep. Some ranchers place Maremma puppies as young as 3–4 weeks old with young lambs though beginning this bonding process at 7–8 weeks is more typical. Although it is easiest to bond Maremma to sheep and goats, cattle ranchers have found that the dogs bond with cows and Maremma are increasingly used to protect range cattle. Some ranchers have found success training Maremmas to protect free-range fowl like chickens from predation from both ground threats such as coyotes, stray dogs and foxes as well as aerial threats such as raptors (hawks, eagles, owls, etc.).

Recently in Warrnambool, Australia, the world's first trial utilized a Maremma to guard the dwindling penguin population of Middle Island. This project won the 2010 Australian Government Coastcare Award. While using Maremma to guard an endangered species is rare, Maremma along with other breeds of livestock guarding dogs are appreciated by environmentalists because they make it possible for livestock to coexist with predators such as wolves and coyotes, reducing their predation by 70% to 80% or more. National park authorities in Italy, the United States and Canada have promoted use of the Maremma Sheepdog, as well as other types of LGDs, to minimize conflict between endangered predator species and farmers.