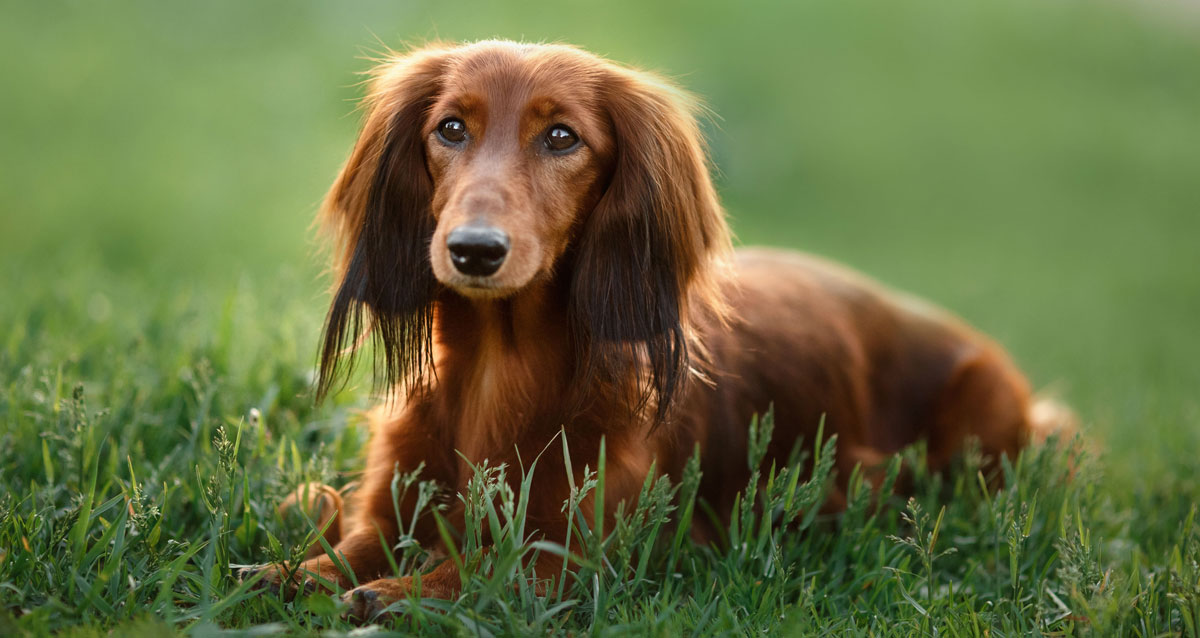 The dachshund is a short-legged, long-bodied breed of dog that belongs to the hound family. The standard size dachshund was bred to scent, chase, and flush out badgers and other burrow-dwelling animals, while the miniature dachshund was developed to hunt smaller animals like rabbits. There are essentially six varieties of dachshunds; as well as two sizes, there are three distinct coats: smooth haired, long haired and wire haired.

Dachshunds are very devoted and loyal to their owners, though they can be standoffish towards strangers. Their devotion to their family make them great watchdogs. The mini smooth dachshunds are more likely to be good barkers.  Dachshunds are playful and brave, and with correct guidance and training can be trained in tracking, tricks and obedience.

Dachshunds may not be the best pets for families with small children although in the right environment, where a pup is socialised appropriately, dachshunds and well behaved children usually get along fine.  Raised correctly, dachshunds are very tolerant and loyal to children within their family. Like many breeds, where there's teasing, high pitched voices, and quick movements, dachshunds may react to an unfamiliar child.

Separation anxiety is not a trait of the breed, but like most dogs, inconsistent time with family - eg. taking a month off to settle puppies in, and then going back to work full time and leaving them alone, is not good for dachshunds - or any breed for that matter.

Training a dachshund can be challenging due to their stubborn nature although they generally respond well to training. In 'the intelligence of dogs' they are rated as an average working dog with a persistent ability to follow trained commands 50% of the time or more.

Like most scent hounds, dachshunds have little road sense so it is recommended that they are kept on a lead when away from home.

Dachshunds do not often enjoy the company of other dogs.

How Much Space and Exercise Does a Dachshund Need?

Dachshunds don’t need a lot of space and make ideal apartment dogs as long as they are not left alone too long.

In the garden, the dachshund’s powerful front paws make them great diggers so they require secure fencing right to or below ground level. Dachshunds will eat almost anything so care should be taken to eliminate any toxic plants from the garden or house. Their hunting instincts also makes them susceptible to snakes and cane toads in areas where they exist.

Dachshunds thrive on exercise and need a daily walk.

The hair between the toes of long haired dachshunds needs to be kept short. Failure to do this may make it difficult for the dog to maintain grip on smooth surfaces, increasing the chance of injury.

Dachshunds have very powerful jaws so never give them squeaky rubber toys to chew. Dachshunds will devour any soft or squeaky toy in record time.

The first dachshund races were held in Australia in the 1970s.

Special thanks to the National Dachshund Council of Australia for help with our Dachshund breed information.

IVDD is the most significant health issue for Dachshunds, with as many as 1 in 4 suffering from a disc-related problem in their lifetime. Intervertebral discs can degenerate, bulging outward, and can sometimes burst or rupture.  When a disc is compromised, the fluid inside can escape into the spinal column, pressing against the spinal cord or nerves, which causes pain, nerve damage, and sometimes paralysis.  Problems can occur anywhere from the neck to the back legs.

The incidence of IVDD is increasing as Dachshunds become more popular.  Unfortunately, there is no known DNA marker, no test for IVDD, and no cure.    Currently the only way to reduce the incidence of IVDD is X-Ray screening and scoring on dachshunds between 2 and 4 years of age.  This screening aims to reduce the occurrence of herniations, by encouraging breeding with dogs that have low numbers of calcifications. This will reduce the occurrence of IVDD and assist with ethical breeding programs.  Back scoring is common practice in several Scandinavian countries, and encouraged in the UK where it is subsidised by the breed council.  The Dachshund Standard has also been modified in the UK to encourage breeders to breed dogs with a shorter back.   In Australia, there are advocates for screening and some standard dachshund breeders are back scoring prior to breeding.  Results are available online here.  For more information see Danish screening program against IVDD,  Dachshund IVDD UK , Dachshund IVDD Support Australia.

If your dachshund is struggling to walk or paralysed - this is an emergency.

Unfortunately, the first time many dachshund owners hear of IVDD is when their dog is struggling to walk, has a pronounced hunch or is paralysed. This is associated with crippling pain and you must keep your dog as still as possible by restricting all movement.  Crate if possible, or use a playpen, bassinet or other small space/restricted area.  Use blankets to keep your dog comfortable, and seek attention from your vet immediately.  Do not delay or defer to another day or more convenient time. The sooner there is veterinary and surgical intervention the better the outcome.  Veterinary attention within the first 24 hours of becoming paralysed gives a higher chance of regaining the ability to walk. Delaying treatment, however, is likely to increase your dog’s chance of a disc rupture and even permanent paralysis.

PRA is a retinal degeneration that occurs in many breeds. The disease causes loss of vision, often leads to blindness, and there is no cure.  PRA has been diagnosed in all varieties of Dachshunds but occurs mostly in the miniature dachshunds, and the mini long-haired variety. A DNA test has been developed that identifies three important factors to eliminate this disease.

Thus, breeders now have information to guide their decisions as responsible custodians of the breed.

How does this affect the puppy buyer? Can you safely buy a mini long-hair or mini smooth puppy as a pet?  The answer is yes, but ensure that the breeder has carried out appropriate tests and ask for copies of the tests.  If necessary, seek help interpreting the tests.  It is crucial that pet owners do not breed from a dog that is a PRA Carrier or PRA Affected.    Dogs can carry the gene without showing any evidence of the disease so haphazard breeding without testing is reckless and irresponsible.

Pes Varus, also referred to as Angular Hock Deformity and Bow Legged Syndrome, is a deformity of the rear leg, or both legs, that gives a dog the appearance of being bowlegged. It occurs when the outside growth plates of the tibia grow at a faster rate than the inside. In a healthy pup that is growing normally the growth plates close between 8 and 12 months of age.  In a pup that has Pes Varus one side will begin to close at 4 to 6 months of age. The condition ranges from mild to severe depending on when the growth plates close. The earlier the first growth plate closes the more severe the condition will be.

It is believed that both sire and dam must be carriers of Pes Varus for it to present in the offspring.  Unfortunately, there is no genetic test available to determine whether a dog carries the gene.  Responsible breeders will follow the progress of puppies at least until they are past the age that Pes Varus might occur.

Pes Varus occurs in Dachshunds worldwide, in all three coat varieties, and in both Miniature and Standard Dachshunds. Cases have been reported in Dachshunds from Japan, Australia, USA, Finland, and the Czech Republic.

Other health conditions that may affect Dachshunds include:

A Double Dapple Dachshund pup.  For more information about double dapples see this article - Are there links between colour and health in dogs. 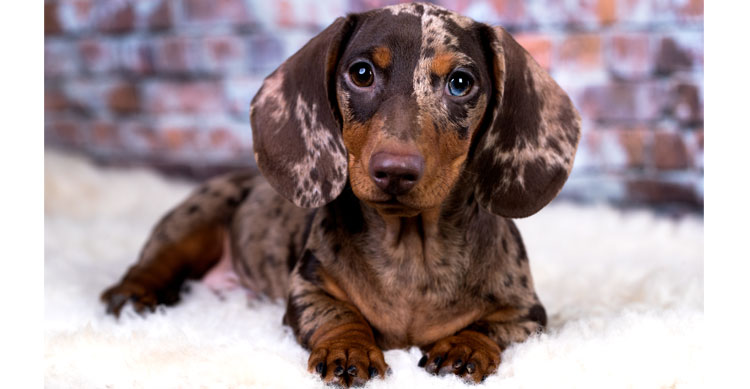 Many thanks for the gorgeous photos - Taylah Jay de-Peters for pics of Luna.  And Magdelena Tyrrell for our main photo, and others of Penny and Polly.

See our list of Dachshund Breeders below, or search for Registered dachshund breeders by location.

Dogs
We have been breeding for many years, hate to think how many, but over the ... read more
QLD
Aquadachs Dachshunds - Mini Smooth Dachshund Breeder - Tamworth, NSW

Dogs
My love of dachshunds started in 1975 with my grandparents being involved with ... read more
Qld
Dimondox Dachshunds - Mini Dachshund Breeder - QLD

Dogs
I have owned dachsunds for over 50 years, and have started breeding them to ... read more
TAS
Johnsanna - Dachshund Breeder - QLD

Dogs
Wyredach is a small breeding kennel for Standard Wirehaired Dachshunds. ... read more
NSW
This gorgeous boy is 'Rufus' is a miniature dachshund with an extremely large attitude problem. He hates children and constantly attacks the family's cat. Can dog training expert Victoria help correct this big attitude trapped in a little body?