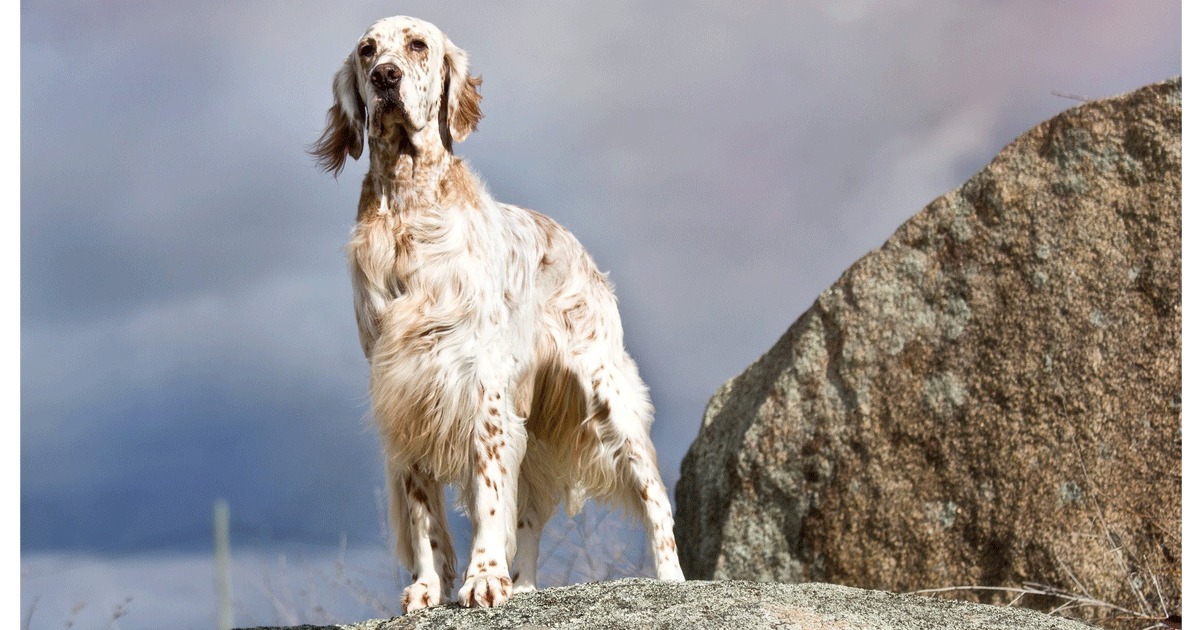 The English Setter is a medium size breed of dog. It is part of the Setter family, which includes the red Irish Setters, Irish Red and White Setters, and black-and-tan Gordon Setters. It is a gun dog, bred for a mix of endurance and athleticism used to hunt for game such as quail, pheasant, and grouse. It is sometimes referred to as the "Laverack" or "Llewellin" Setter as these were famous strains of the breed.

This breed's standard temperament is best described as a "Gentleman by Nature". However, it can also be strong-willed and mischievous, especially if coming from working/field breeding lines. English Setters are energetic, people-oriented dogs, that are well suited to families who can give them attention and activity, or to working with a hunter, where they have a job to do. They are active dogs that need plenty of exercise and up to two hours a day of exercise is recommended. Inside they tend to be lower energy and love to be couch potatoes and lap dogs; the breed is described as "intensely friendly," "good natured," and "adores visitors and is particularly happy with children."

They rank 37th in Stanley Coren's The Intelligence of Dogs, being of above average working/obedience intelligence. English Setters are very intelligent and can be trained to perform about any task another breed can do, with the exception of herding. However, they are not always easy to train, as their natural bird instinct tends to distract them in outdoor environments. Their temperament is considered to be gentle and as English Setters can be very sensitive to criticism, positive reinforcement training methods using treats and praise work best when undertaking basic training.

The bench or show type has a long, flowing coat that requires regular grooming. The field or hunting type has a shorter coat that requires less grooming. The base colour of the coat is white with differing coloured ticking also called flecks or speckling. The various speckled coat colours when occurring in English Setters are referred to as belton; valid combinations are white with black (blue belton), white with orange flecks (orange belton), white with orange flecks and lighter nose (lemon belton), white with liver flecks (liver belton), or "tricolour" which is blue or liver belton with tan markings on the face, chest, and legs. The flecking should not form large patches on the body and the flecks should be distributed all over the body. The use of the word "belton" was first coined by Laverack to describe his ideal for flecking and is also the name of a village in the extreme north of England.

Biggest thanks to Rikki for sharing photos.

Dogs
Most breeders that have this page will tell you a story about their first dog ... read more
QLD