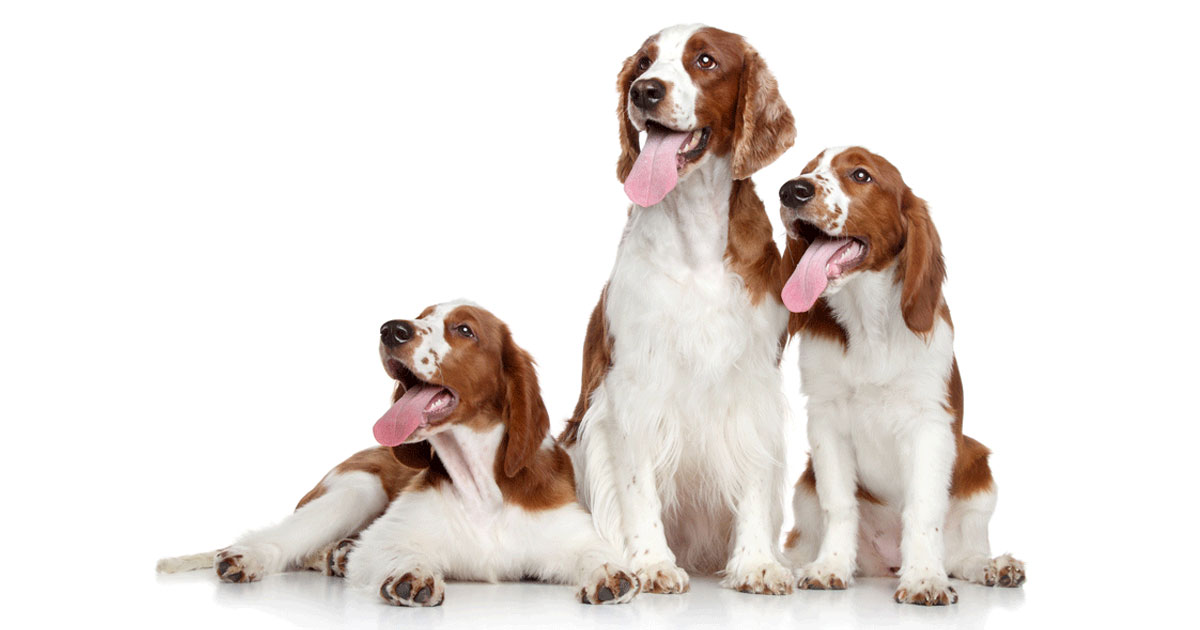 The Welsh Springer Spaniel is a breed of dog and a member of the spaniel family. Thought to be comparable to the old Land Spaniel, they are similar to the English Springer Spaniel and historically have been referred to as both the Welsh Spaniel and the Welsh Cocker Spaniel. They were relatively unknown until a succession of victories in dog trials by the breed increased its popularity. Following recognition by The Kennel Club in 1902, the breed gained the modern name of Welsh Springer Spaniel. The breed's coat only comes in a single colour combination of white with red markings, usually in a piebald pattern. Loyal and affectionate, they can become very attached to family members and are wary of strangers. Health conditions are limited to those common among many breeds of dog, although they are affected more than average by hip dysplasia and some eye conditions. They are a working dog, bred for hunting, and while not as rare as some varieties of spaniel, they are rarer than the more widely known English Springer Spaniel with which they are sometimes confused.

The Welsh Springer Spaniel is an active, loyal, and affectionate breed. They may meet unfamiliar strangers with barking when in the dog's territory, or act aloof, cautious or wary. The breed is well known for being friendly and demonstrative to all members of the family, especially children, and accepting other pets of the household with a friendly, playful attitude.

The breed is quick to learn but can be headstrong, though with correct training can become very obedient. The Welsh Springer was bred for work and endurance, and as with many breeds of hunting dogs requires a regular exercise routine to keep them healthy and content. Without adequate exercise, a Welsh Springer Spaniel may appear hyperactive. Some Welsh Springers can become clingy towards their owners and suffer separation anxiety when alone.

The Welsh Springer is generally a healthy breed, but some can suffer conditions common to many breeds such as hip dysplasia, Canine glaucoma and like other dogs with pendulous ears, they are prone to ear infections such as otitis externa. In a survey of over a hundred breeds of dog conducted in 1997, the Welsh Springer Spaniel was ranked 14th for worst hip score, with the average score of the breed being 18.45. The average lifespan is 12 to 15 years.