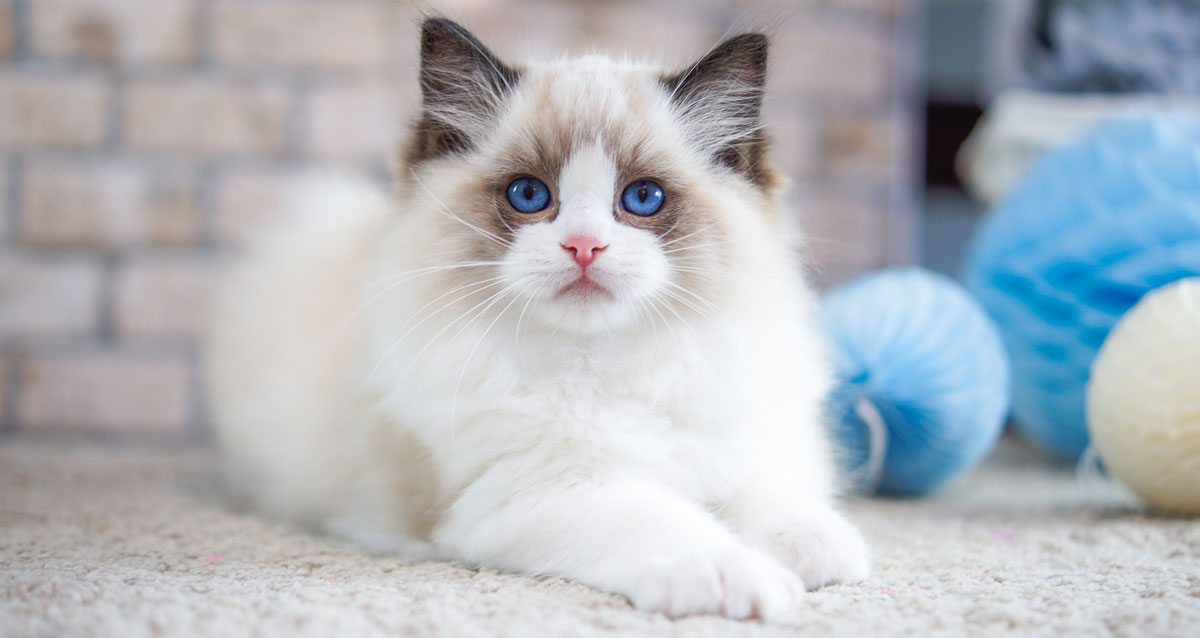 The Ragdoll is a very popular cat breed with blue eyes and a distinct colorpoint coat. It is a large and quite muscular semi-longhair cat with a soft and silky coat.

The ragdoll breed was developed by American breeder Ann Baker in the 1960's.  Ann bred Josephine, a domestic longhaired white female that had offspring with unique temperament traits that were very endearing.  Josephine's kittens were docile and placid, very affectionate in nature, and a tendency to go limp and relaxed when picked up.   Josephine was of a Persian/Angora type and had litters sired by several unknown male Birman or Burmese-like cats, one of which had the Siamese point coloration.   Ann selected individuals with the traits she wanted for her breeding program - large size, gentle demeanor, and a tendency to go limp when picked up, as well as the striking pointed coloration.

The Ragdoll is now well known for it's placid temperament and very affectionate nature.  The name "Ragdoll" comes from the tendency of the cats from Ann's original breeding stock to go limp and relaxed when they were picked up.  This docile and floppy nature is a characteristic thought to have come from the Persian and Birman breed. There are varying opinions regarding whether this trait is due to a genetic mutation.

Breed standards describe the Ragdoll as a lap cat.  Affectionate, intelligent, and very relaxed in temperament.  Ragdoll cats are said to be more interested in humans than some of the more aloof breeds. Ragdolls are often referred to as dog or puppy like due to behaviors such as their tendency to follow people around, their ease at being physically handled, and their relative lack of aggression toward other pets.  They may run to greet you at the door, sleep with you, and generally follow you around the house choosing to be where you are.   Ragdolls are very gentle cats, rarely being 'scratchy' and unpredicatble.   They usually play without extending their claws.  In all, Ragdolls are well behaved, easy to care for and have become one of the most popular cat breeds.

The Ragdoll is one of the largest domesticated cat breeds, with a sturdy body, large frame, and proportionate legs. A fully-grown female weighs from 3.6 to 6.8 kg (8 to 15 pounds). Males are substantially larger, ranging from 5.4 to 9.1 kg (12 to 20 pounds) or more.  The genes for point coloration are responsible for the blue eyes of the Ragdoll.

There are a number of colour variations and coat patterns in Ragolls. Colours are red, seal, chocolate and the corresponding "dilutes", including blue, lilac, and cream.  The coat patterns of the Ragdolls are: colorpoint, mitted, bicolor & lynx (tabby markings in one of the three previous patterns). The varying patterns may be bred in the above colors.  Ragdoll kittens are born white; they have good color at 8–10 weeks and full color and coat at 3–4 years.

The Ragdoll’s semi long coat is plush and soft, and unlike other longhaired breeds, only requires minimal grooming to keep it looking its best.  Quality coats consist mainly of long, soft guard hairs. Ragdolls don't tend to mat as much as other breeds because of their unique coat type, which only exists in the traditional lines.  They should be combed on a regular basis to find and remove any loose hair or tangles. Ragdolls, just like all breeds of cats, will shed, usually with the change of seasons.  The absence of the thick, dense, insulating undercoats results in reduced shedding and matting.

The Ragdoll is a healthy breed of cat with few health problems. There are some conditions that Ragdolls may be at greater risk of developing incuding:

Feline hypertrophic cardiomyopathy (HCM)  - the most common form of heart disease in cats.  While HCM can occur in any breed, the genetic mutation that causes the development of HCM in Ragdolls and Maine Coons has been identified and a DNA test is available for these breeds.  An echocardiogram can also confirm whether a cat has HCM.   Cats with HCM should be removed from breeding programs.

Polycystic Kidney Disease (PKD) is an inherited disease in Persian and Persian-cross cats. PKD causes multiple fluid-filled cysts on the kidneys. It has also been diagnosed in British Shorthairs, the Exotic Shorthair, Scottish Folds, Birmans, Ragdolls, and Himalayans. It is a slowly progressive, irreversible disease.

There are genetic tests for PKD and HCM. Always ask breeders if their breeding cats have been DNA tested clear and if you can view the DNA results.  Some breeders will have tested and established that their cats are clear by parentage or over a number of generations.

Feline immunodeficiency virus (FIV) can affect all breeds.  Cats who are infected with FIV may not show symptoms for many years. Although the virus is slow-acting, a cat's immune system is severely weakened once the disease takes hold.  FIV is spread by cats fighting, most commonly via saliva (and biting) during fights between undesexed (intact) males.  Keeping cats indoors is the best way to prevent exposure. A blood test can diagnose the presence of the FIV.

Feline leukemia virus (FeLV) is a retrovirus that can infects any cat breed. If the cat's immune system can't defeat the virus, it can lead to diseases which can be lethal.  FeLV can spread alot more easily than FIV with transmission possible via salvia, urine, feces, blood, and/or the mother’s milk.  As with FIV, undesexed male cats that are most likely to contract the virus.  If a female has the virus, however, she can pass it on to her kittens.  Two blood tests, approximately 3 months apart are required to determine if a cat is clear of FeLV.

Please note that in order to guarantee that a kitten or cat is clear requires that all of the cats they have had contact with are clear.  In addition, because FIV can be latent for many years, and FeLV requires two tests, ensuring the absence of these diseases requires that the breeder has a very sound understanding of transmission and testing requirements.

A breeder can only guarantee that a cat or kitten is clear of FIV and FeLV at the time it leaves their premises, and prior to exposure to other cats.  If you already have a cat, make sure they're tested for both of these diseases before you bring a new cat or kitten home.  In addition, keep cats indoors, and make sure they're desexed.  FIV and FeLV are rare, but they are deadly and preventable.

Search for Registered Ragdoll Breeders by specific location or by city below. You can also check our listings for Ragdoll Kittens for sale here

Cats
I am committed and very passionate about all of my fur family, this is a hobby ... read more
Annangrove, NSW
AMBERGLADE RAGDOLLS Adelaide, SA

Cats
My name is Elly and I am a hobby Ragdoll breeder registered with GCCFSA and am ... read more
MEADOWS, SA
Amjance Ragdolls - Ragdoll Cat Breeder - Fraser Coast, QLD

Cats
ANGEL EYES RAGDOLLS because everyone needs an Angel.....

Cats
I have been passionate about animals all my life, and am finally fulfilling a ... read more
Belrose, NSW
Bilwon Classy Cats - Registered Cat Breeder - Cairns, Queensland

Cats
Hello my name is Sharon,

Cats
My name is Luke and I am a registered breeder of the loveable Ragdoll cat. I am ... read more
SA
Crossfire - Ragdoll Cat Breeders Australia - Queensland

Cats
At Dolldelight we breed ragdolls for quality and temperament. Our kittens are ... read more
Goulburn, NSW
Dolljavu - Ragdoll Breeder

Cats
We are a very small family run cattery, we all have a great love of cats, all ... read more
Pakenham, VIC
Jorgiaryan Ragdolls - Ragdoll Breeder - Adelaide, South Australia

Cats
"The Ragdoll Cat Is Truly Beautiful Inside & Out"

Cats
My name is Elizabeth. Some years ago I heard about amazing qualities of the ... read more
VIC
Softnsweet Ragdolls - Ragdoll Breeder - Gold Coast, Queensland

Cats
We are boutique breeders of the magnificent Ragdoll Cat and are situated in the ... read more
Tewantin, QLD
Vanitydoll Ragdolls - Ragdoll Cat Breeder - Melbourne, VIC