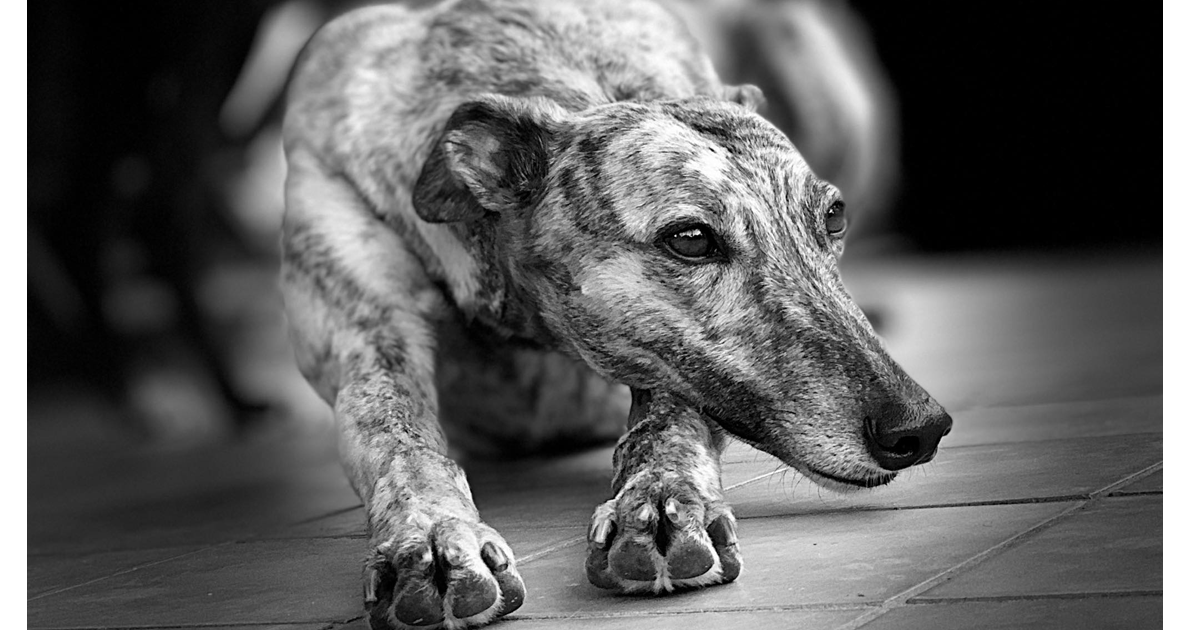 The Greyhound is a very old European breed, a sighthound which has been historically bred for coursing game and latterly racing. Since the rise in large scale adoption of retired racing Greyhounds, particularly in North America from the end of the 20th century, it has seen a resurgence in popularity as a family pet.

The Greyhound is not an aggressive dog, as some may believe due to muzzles worn during racing. Muzzles are worn to prevent injuries resulting from dogs nipping one another during or immediately after a race, when the 'hare' has disappeared out of sight and the dogs are no longer racing but still excited. The thin skin of the Greyhound can tear easily from a small nick from teeth, so even a minor skirmish can result in stitches and time out from racing. Greyhounds with a high prey drive occasionally wear muzzles outside the racetrack; owners aware that their Greyhound has a high tendency to chase small prey will protect the prey by applying the muzzle.

Contrary to popular belief, adult Greyhounds do not need extended periods of daily exercise, as they are bred for sprinting rather than endurance. Greyhound puppies that have not been taught how to utilize their energy, however, can be hyperactive and destructive if not given an outlet, and they require more experienced handlers.

Greyhounds are quiet, gentle, and loyal to owners. They are very loving creatures, and they enjoy the company of their humans and other dogs. Whether a Greyhound enjoys the company of other small animals or cats depends on the individual dog's personality. Greyhounds will typically chase small animals; those lacking a high 'prey drive' will be able to coexist happily with toy dog breeds and/or cats. Many owners describe their Greyhounds as "45 mile per hour couch potatoes".

Greyhounds live most happily as pets in quiet environments. They do well in families with children as long as the children are taught to treat the dog properly and with politeness and appropriate respect. Greyhounds have a sensitive nature, and gentle commands work best as training methods. Greyhounds occasionally develop separation anxiety when re-housed or when their owners have to leave them alone for a period of time. The addition of a second Greyhound often solves this problem.

A very common misconception regarding Greyhounds is that they are hyperactive. In retired racing Greyhounds, this is usually not the case. Greyhounds can live comfortably as apartment dogs, as they do not require much space and sleep close to 18 hours per day. In fact, due to their calm temperament, Greyhounds can make better "apartment dogs" than smaller, more active breeds.Occasionally, a Greyhound may bark; however, Greyhounds are generally not barkers, which is beneficial in suburban environments, and they are usually as friendly to strangers as they are with their own family. At some race tracks, Greyhounds are housed in large spacious crates for sleeping in, most know of no other way of life than to remain in a crate the majority of the day. Crate training a retired greyhound in a home is therefore generally extremely easy.

Many Greyhound adoption groups recommend that owners keep their Greyhounds on a leash whenever outdoors, except in fully enclosed areas. This is due to their prey-drive, their speed, and the assertion that Greyhounds have no road sense. In some jurisdictions, it is illegal for Greyhounds to be allowed off-lead, even in off-lead dog parks, so it is important to be familiar with the relevant local laws and regulations. However, a good run at least once a week is important, especially for younger greyhounds, and suitable areas can usually be found. Due to their size and strength, adoption groups recommend that fences be between 4 and 6 feet, to prevent them from jumping out.

You can find more information here on Grehounds as pets...