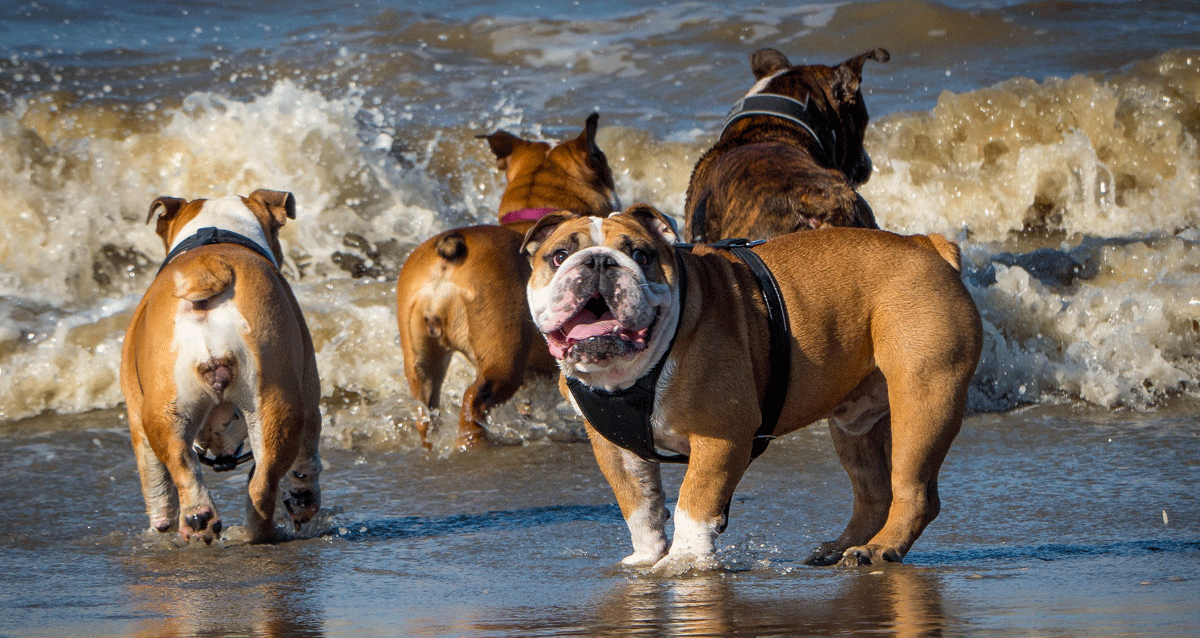 Temperamentally, the British Bulldog is delightful. People who go into bulldogs with their eyes wide open never want to own anything else, but know that Bulldogs come with their own set of pretty serious issues.

The British Bulldog, in fact any Bulldog, is so physically exaggerated that their short lives can be a bit of a struggle. Medical costs are high and ongoing for this breed that suffers serious respiratory issues. Having the budget to be able to afford veterinary care is an absolute necessity for anyone thinking about a Bulldog.

Bulldog puppies are irresistibly cute and have attracted many people who fall in love with a cute puppy but have no ability to provide for and cope with such a high maintenance breed. If you're thinking about a Bulldog and you're not a really experienced dog person you're best advised to look for an easier to care for breed.

Moves to attempt to breed healthier bulldogs are commendable, if not a century too late, but British Bulldogs are only for breed specialists who can cope with the demands of the breed.

We can blame the Romans and their love of blood sports for the Bulldog. Mastiffs brought to Britain by the Romans were obviously selectively bred for blood sports, particularly bear and bull baiting. The legs got shorter, the chests broader, the heads got bigger, and the jaws became broader and undershot to allow the dog engaged with its foe to breathe through nostrils placed closer to the top.

Bull baiting was enormously popular until public outcry saw it banned in 1835. Unemployed Bulldogs of the time were then used for dog fighting but crossing with terriers produced the bull terriers that exceeded the bulldog's appeal and ability in the dog pit.

Since that time the Bulldog has had its ups and a few downs. One of the great anomalies of dog temperament is that the breeds developed for blood sports have a naturally high affection for people. Bulldogs survived unemployment because their lovely natures ensured plenty of them were kept as pets.

The rise of the dog show was just what the Bulldog needed and they found a new vocation strutting their stuff in the show ring. That exposure created international interest in the breed and it spent a considerable part of the 20th century as one of the world's more favoured family pets.

Check our listings for Puppies for sale here and click on the links to our breeders below to go to their profile page.  You can also click here to search for Registered British Bulldog Breeders by location.

Being a short nosed (Brachycephalic) Breed, British Bulldogs are susceptible to breathing problems or Brachycephalic Airway Obstruction Syndrome due to their short and wide skulls and short snouts.  With these respiratory problems, airways can become obstructed and breathing becomes laboured or near impossible.  They are more at risk of heat stroke as they are not able to regulate their body temperature which can be life threatening.  Care and attention to ensure overheating doesn't occur is critical - particularly in hot weather.  The severity of the condition can be relieved somewhat with surgery that widens the nostrils and shortens the palate.  British Bulldogs can also suffer from skin problems, inverted eyelashes, kidney stone disease and kneecap dislocation.

Cherry Eye:  This eye condition is quite common in British Bulldogs, presenting with a third inverted eyelid.  It can be corrected with care, commonly with the third eyelid surgically removed.

Keratoconjunctivitis Sicca:  Often referred to as ‘dry eye’, this is usually caused by an autoimmune reaction that affects the tear glands, reducing tears and causing dryness and irritation.

Testing of breeding dogs is recommended for:

The British Bulldog Club of Victoria lists DNA tests for the breed which include:

Hyperuricosuria (HUU)
Hyperuricosuria (HUU) means elevated levels of uric acid in the urine. This trait predisposes dogs to form stones in their bladders or sometimes kidneys. These stones often must be removed surgically and can be difficult to treat. HUU is inherited as a simple autosomal recessive defect.

Cystinuria
Cystinuria in dogs is indicated by the presence of cystine stones in the kidney, bladder or ureter. Failure by the kidneys to reabsorb amino acids results in the formation of cystine crystals and sometimes stones in the urine which can lead to blockage of the urethra.

We are a British Bulldog ... read more

Dogs
I have a small kennel which is my home. All my babies live in our home and are ... read more
Melbourne, VIC
Karazma Kennels - British Bulldog Breeder - Melbourne, VIC

Dogs
We have a number of Australian Champions and have sourced the world to locate ... read more
QLD
Preciousbull Kennels - British Bulldog Breeder - Lewiston, SA

Dogs
I am a small kennels based in the Waikato. I have been involved in breeding and ... read more
Waikato
Wonderbull British Bulldog Breeder - Culburra Beach, NSW