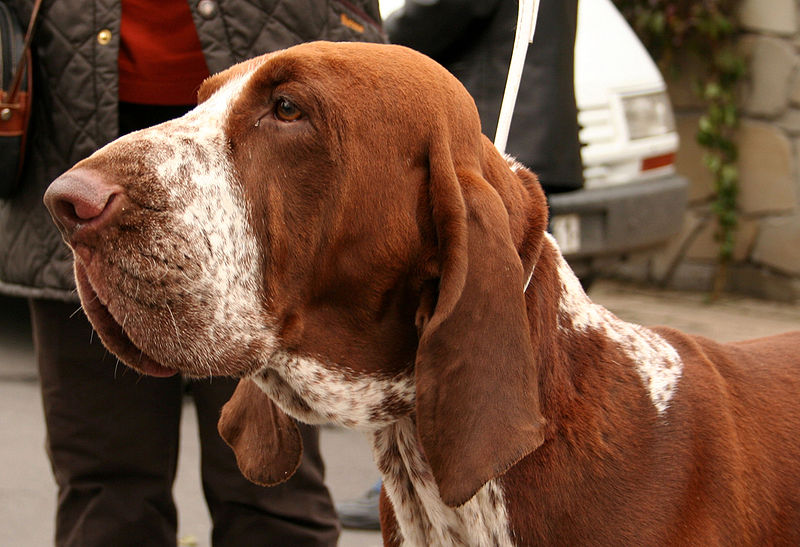 The Bracco Italiano is a breed of dog developed in Italy as a versatile gun dog. Braccos are very much a people-loving dog and thrive on human companionship, having a strong need to be close to their people. They are a particularly good family dog, and many have a strong love of children. They get along well with other dogs and pets, if trained to do so - it is, afterall, a hunting breed - and must be taught what to chase and what not to. They are very willing to please as long as they have decided that your idea is better than theirs.

Obedience training is a must for a Bracco, and the more is asked of them, the better they do. Harsh reprimands do not work with this breed unless the reprimand is a fair one - and harshness must occasionally be used with some dogs to remind them who is actually in charge. Although not an aggressive breed, many Braccos will alert if there is a reason, and some will bark or growl if there's a good reason.

The breed loves to hunt, and they excel at it - in fact, a non-hunting Bracco is not a happy Bracco, and will act out in various other ways. Hunting without a gun is an area in which the Bracco can excel and this can be a great opportunity for training the dog to connect with the owner. They are an active breed, but require more mental exercise than physical exercise to keep them happy- but regular free running will actually entertain both their minds and senses satisfactorily and so should be encouraged.

The Bracco - or Italian Pointer- should be athletic and powerful in appearance, most resembling a cross between a German Shorthaired Pointer and a Bloodhound, although it is nothing like them in character. It has pendulous upper lips and long ears that create a serious expression. It should be "almost square", meaning that its height at the withers should be almost the same as the length of its body. It should not however be actually square as this would render its famous rear driving push off and front/rear extension to be compromised, thus losing much of its powerful grace. The tail can be docked, mostly due to the strong possibility of injury in rough/dense terrain when hunting, however there has been a sea-change in Italy, with some now working the breed with full tail.