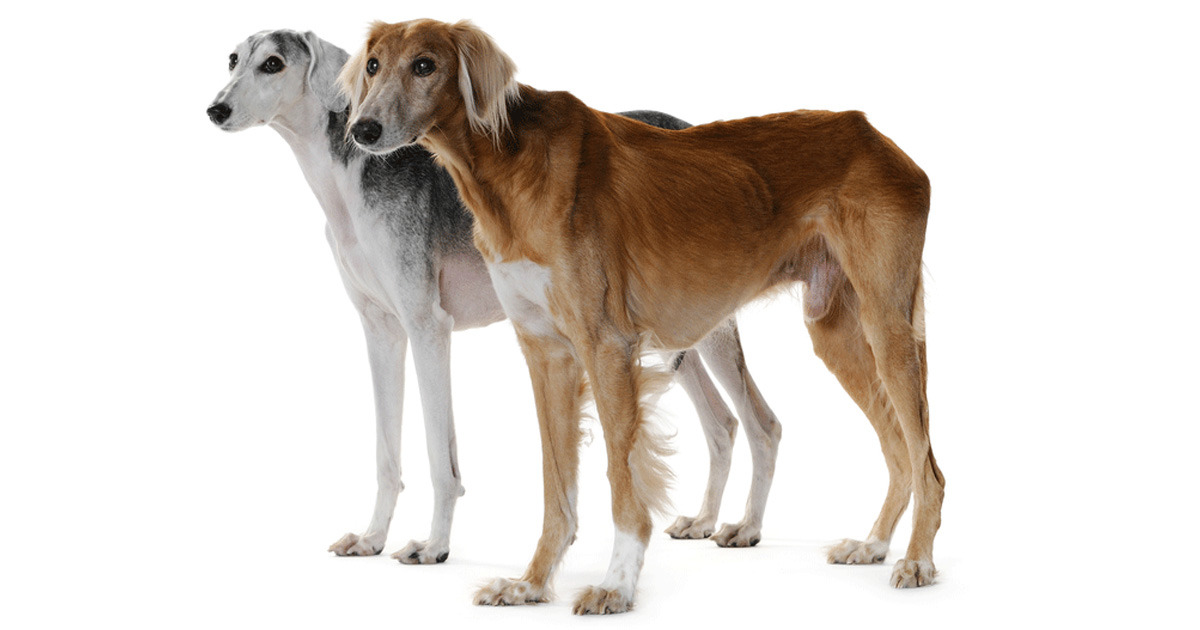 The Saluki, also known as the Royal Dog of Egypt is one of the oldest known breeds of domesticated dog. There are petroglyphs and rock arts in Golpaygan and Khomein in central Iran that shows saluki-like hounds and falcons accompanying hunters chasing preys (ca. 8000–10,000 BCE). Also on the potteries found in Susa, Iran (ca. 4200 BCE) are images of saluki-like hounds chasing ibex or lying next to pools. and from the period of the Middle Kingdom onwards, Saluki-like animals appear on the ancient Egyptian tombs of 2134 BCE. They have connections to the Avesta, Bible, Koran and Imperial China. Modern breeding in the west began in 1895 when Florence Amherst imported a breeding pair of Salukis from Lower Egypt and began working to popularize the breed. The first registered Salukis in the western studbook were Cyrus and Slongha Peri imported from Iran and registered with the DWZRV.

The Saluki is a sighthound and historically traveled throughout the Middle East and through Silk road with caravans and nomadic tribes over an area stretching from the Sahara to the Caspian Sea and China. They have been used to hunt quarry such as gazelles, Hares and ibex (mostly in North Iran). Shaped like a typical sighthound, they come in two varieties, smooth and feathered. Though they are an independent breed that needs patient training, they are gentle and affectionate with their owners. Health issues in salukis include cancer and cardiac problems but it is less common in countries of origin.

Historically, Salukis were used by nomadic tribes for hunting. Typical quarry included gazelles, hares, foxes and jackals. In one Bedouin method of hunting hares, the hunter rides close to the quarry on a camel while holding the Saluki, which he throws towards the prey while at speed, giving the dog a running start. Another method, primarily used in hunting gazelles, involved the use of a hawk to gouge out the eyes of the prey, so that a Saluki can then bring down the blinded animal.

A true modern Saluki retains the qualities of hunting hounds and may seem reserved to strangers. An independent and aloof breed, but gentle and affectionate, they can be difficult to train and any such training should be gentle and patient. They can get bored easily, and should not be left at home unattended for long periods. Sensitive and intelligent, the Saluki should never be trained using force or harsh methods, and typically does not enjoy rough games or typical dog games such as chasing sticks. Early socialization is required to prevent timidity and shyness in later life. Given their hunting instincts, they are prone to chasing moving objects.

While the Greyhound is credited as being the fastest dog breed up to distances of around 800 metres (2,600 ft), both the Saluki and Whippet breeds are thought to be faster over longer distances. The 1996 edition of the Guinness Book of Records lists a Saluki as being the fastest dog, reaching a speed of 68.8 kilometres (42.8 mi) per hour. Due to its heavily padded feet being able to absorb the impact on its body, it has remarkable stamina when running.