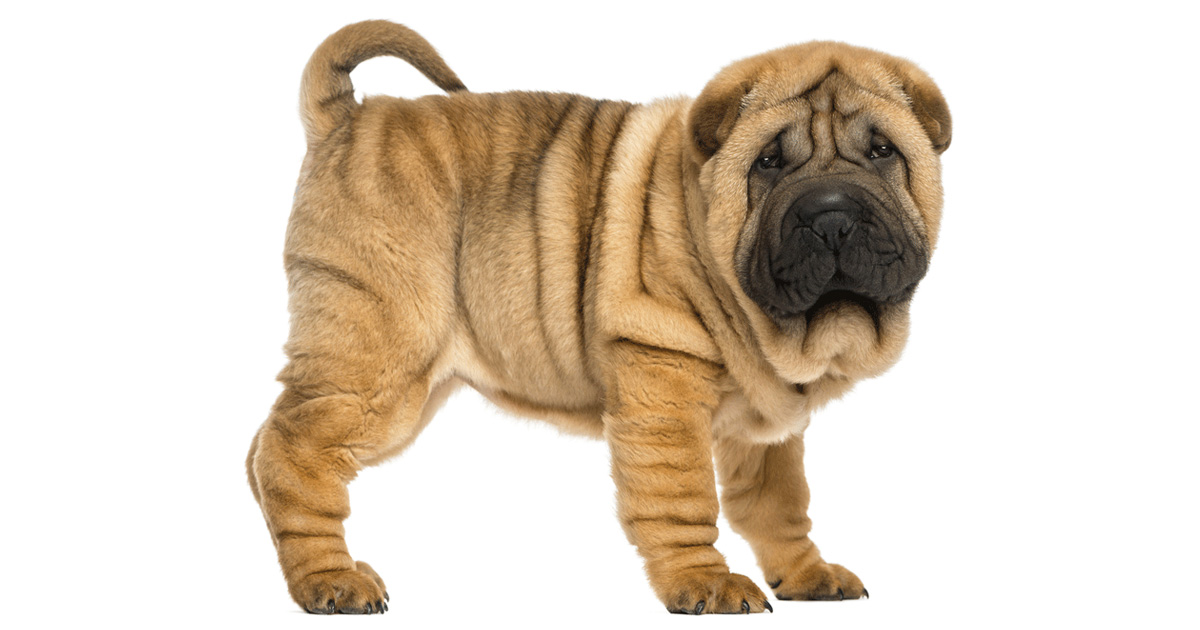 The Shar Pei was originally bred as a fierce palace guard dog in ancient China. The breed is extremely loyal, intelligent, independent, reserved and suspicious of strangers. They are easily bored by inappropriate “positive only” training. If the Shar Pei is poorly socialised, it can become highly territorial and aggressive. This breed needs very strong human leadership and is not recommended for the first time or inexperienced owner.

The Shar Pei, or Chinese Shar-Pei, is a breed of dog known for its distinctive features of deep wrinkles and a blue-black tongue. The breed comes from China. The name translates to "sand skin" and refers to the texture of its short, rough coat. As puppies, Shar Pei have numerous wrinkles, but as they mature, these wrinkles loosen and spread out as they "grow into their skin". Shar Pei were named in 1978 as one of the world's rarest dog breeds by TIME magazine and the Guinness World Records. The American Kennel Club did not recognize the breed until 1991.

All Shar-Pei puppies need early socialization with children, strangers, and other animals. Like other fighting breeds, they can be stubborn, strong-willed and very territorial. Early training can help control these traits before they become problem behaviors. Some people may experience a sensitivity to the harshness of the coat of either length. This is a mild, short-lived rash that can develop on the skin that has been in contact with the coat, most commonly on the forearms.

The Shar Pei is often suspicious of strangers, which pertains to their origin as a guard dog. It is a very independent and reserved breed. Nevertheless, the Shar Pei is extremely devoted, loyal and affectionate to its family and is amenable to accepting strangers given time and proper introduction at a young age. If poorly socialized or trained, it can become especially territorial and aggressive. Even friendly and well-socialized individuals will retain the breed's watch dog proclivities (like barking at strangers). It is a largely silent breed, barking only when it is playing or worried. The Shar-Pei were originally bred as palace guards in China. The breed is amenable to training but can be very stubborn. With repetition and a clear reward system, training is not very difficult. Overall, the Shar Pei can be a dog that is loyal and loving to its family while being very protective and independent.

Western Shar Pei comes in three different coat types: horse, brush, and bear coat. The unusual horse coat is rough to the touch, extremely prickly and off-standing and is closer to the original traditional Shar Pei breed in appearance and coat type than the brush or bear coat. This coat is fairly prickly and can be rough or irritating when petting in the opposite direction of the fur. The horse coat is generally thought to be more active and predisposed to dominant behavior than the brush coat. The brush-coated variety have slightly longer hair and a smoother feel to them. The brush coat is generally considered to be more of a "couch potato" than the horse coat. This breed sheds normally twice a year.

Dogs
At Staxapei Kennels, we are a boutique kennel based in Sydney. We breed for ... read more
NSW