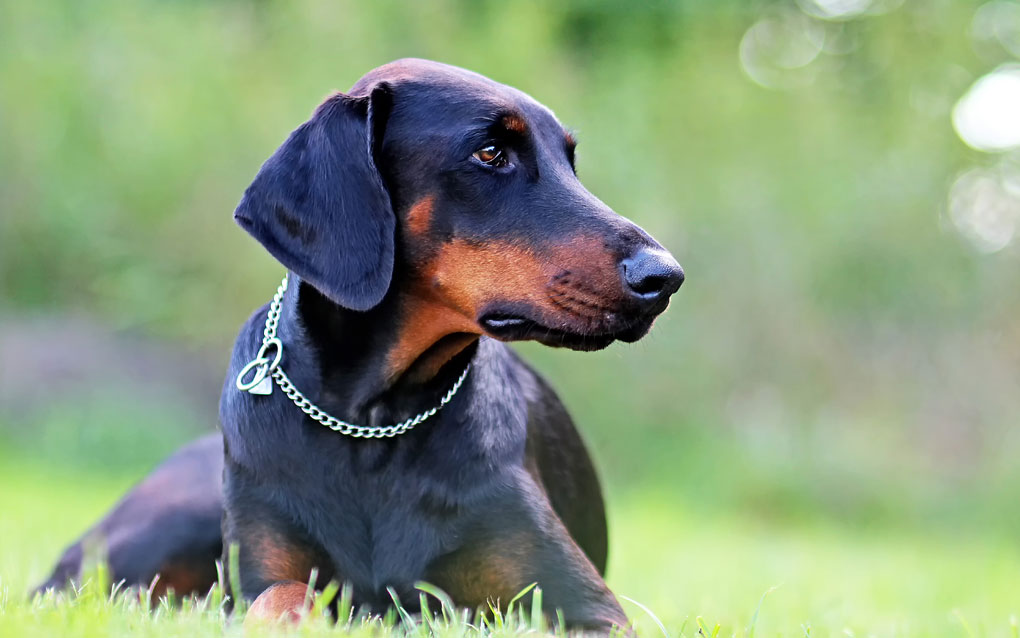 The Doberman (also known as the Doberman Pinscher), is a breed of domestic dog originally developed around 1890 by Karl Friedrich Louis Dobermann. Doberman Pinschers are among the most common of pet breeds, and the breed is well known as an intelligent, alert, and loyal companion dog. Although once commonly used as guard dogs or police dogs, this is less common today.

In many countries, Doberman Pinschers are one of the most recognizable breeds, in part because of their actual roles in society, and in part because of media attention. Careful breeding has improved the disposition of this breed, and the modern Doberman Pinscher is an energetic and lively breed suitable for companionship and family life. Although many Dobermans have been outdoor dogs, they are best suited to live indoors.

Although they are considered to be working dogs, Doberman Pinschers are often stereotyped as being ferocious and aggressive. As a personal protection dog, the Doberman was originally bred for these traits: it had to be large and intimidating, fearless, and willing to defend its owner, but sufficiently obedient and restrained to only do so on command. These traits served the dog well in its role as a personal defense dog, police dog, or war dog, but were not ideally adapted to a companionship role. The Doberman Pinscher's aggression has been toned down by modern breeders over the years, and today's Dobermans are known for a much more even and good natured temperament, extreme loyalty, high intelligence, and great trainability. In fact, the Doberman Pinscher's size, short coat, and intelligence have made it a desirable house dog.

They can easily learn to 'Respect and Protect' their owners, and are therefore considered to be excellent guard dogs that protect their loved ones. They are generally sociable toward humans and can be with other dogs. However, Dobermans rank among the more-likely breeds to show aggressive behaviour toward strangers and other dogs, but not among the most likely to do so. They are very unlikely to show aggressive behaviour toward their owners.

Although the aggressiveness stereotype is less true today, the personality of the Doberman Pinscher is unique. There is a great deal of scientific evidence that Doberman Pinschers have a number of stable psychological traits, such as certain personality factors and intelligence. As early as 1965, studies have shown that there are several broad behavioral traits that significantly predict behavior and are genetically determined. Subsequently, there have been numerous scientific attempts to quantify canine personality or temperament by using statistical techniques for assessing personality traits in humans. These studies often vary in terms of the personality factors they focus on, and in terms of ranking breeds differently along these dimensions. One such study found that Doberman Pinschers, compared to other breeds, rank high in playfulness, average in curiosity/fearlessness, low on aggressiveness, and low on sociability. Another such study ranked Doberman Pinschers low on reactivity/surgence, and high on aggression/disagreeableness and openness/trainability.

Dogs
Dobermann breeder. See photos of my my european imports-


Dobermans are a mix of 6 different breeds and extremely loyal. But, are they the best breed ever? Let us know in the comments below!

Posted by Animalist on Wednesday, 6 January 2016