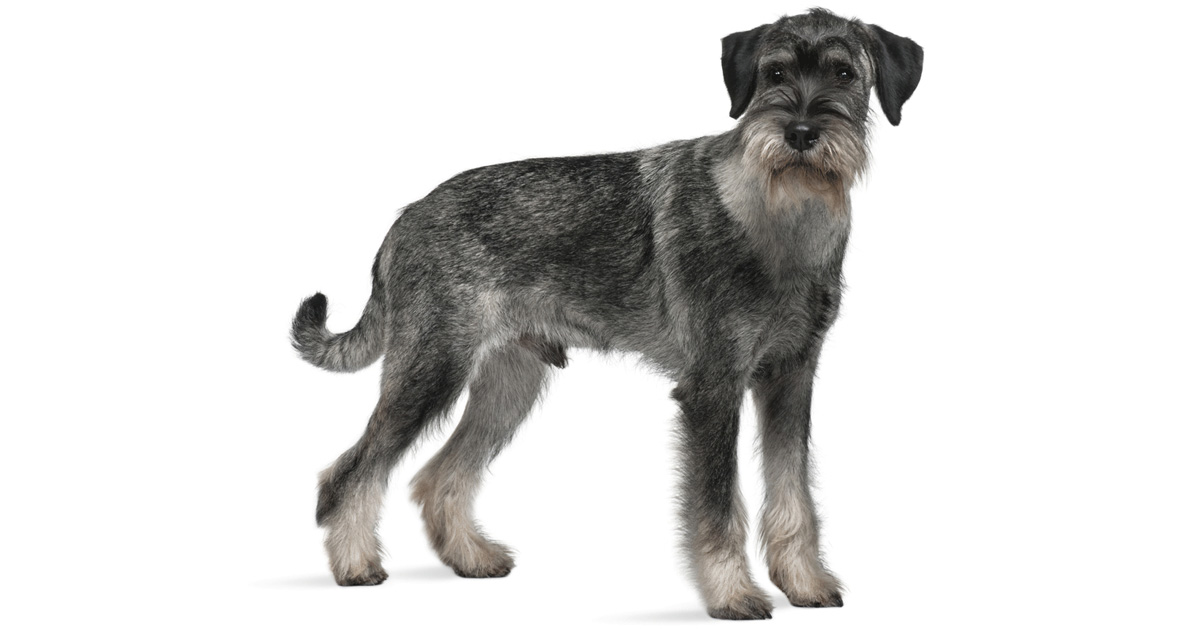 A schnauzer is a dog breed that originated in Germany in the 15th and 16th centuries. The term comes from the German word for "mustache", because of the dog's distinctively bearded snout. Although the schnauzer is considered a terrier-type dog, they do not have the typical terrier temperament.

The schnauzer type consists of three breeds: the giant, standard, miniature. Toy and teacup are not breeds of schnauzer, but these common terms are used to market undersized or ill-bred miniature schnauzers. The original schnauzer was of the same size as the modern Standard Schnauzer breed, and was bred as a rat catcher, yard dog and guard dog. The Miniature Schnauzer is the result of crossing the original schnauzer with breeds including the poodle and the affenpinscher.

Miniature Schnauzers are around 1 ft (30 cm) tall at the shoulder and weigh between 14 and 20 lb (6.4 and 9.1 kg) They have high energy levels and are very intelligent dogs. The American Kennel Club (AKC) approves salt and pepper, black, and black and silver as acceptable coat colors for a miniature schnauzer. They are often bred in pure white or even parti (multi) colored, but neither are approved by the AKC. The miniature is more delicate and less robust than his cousins, and should not live outside. They make excellent pets as they are loyal companions and are rarely aggressive toward strangers, although they are quick to sound the alarm at a perceived threat.

Standard Schnauzers are around 1.5 ft (46 cm) tall at the shoulder and weigh 30 to 45 lb (14 to 20 kg). They are in the group of working dogs. Standard schnauzers have been used to catch rats and as guard dogs. They have also carried messages in times of war, helped the Red Cross and been police dogs.

Giant Schnauzers are around 2 ft (61 cm) tall at the shoulder and weigh between 55 and 80 lb (25 and 36 kg). They are working dogs that were developed in Swabia in the 17th century, as a rough coated variant of the pinscher breeds. Unlike the Miniature Schnauzer, the Giant Schnauzer is unrelated to the Standard Schnauzer and was developed independently through crosses of black Great Danes, Munchener, German Shepherds, Rottweilers, Dobermans, Boxers, Bouvier des Flandres, Thuringian Shepherds, and the Standard Schnauzer. It was originally bred to drive livestock to market and guard farms.

Friendly and loving, schnauzers become part of their families and can get along well with children if raised and socialized properly. They are protective and energetic, and will alert members of the household to any potential danger. The schnauzer, ever alert, makes an excellent watchdog, although its watchful nature can lead to persistent barking. To avoid annoying the neighbors, dog owners should make every effort to curb excessive barking through training. The breed is of above average intelligence and can be independent minded, so early training and diverse daily exercise is recommended.

Dogs
Klabauter Standard Schnauzers has been in operation since 1999, when the breed ... read more
NSW