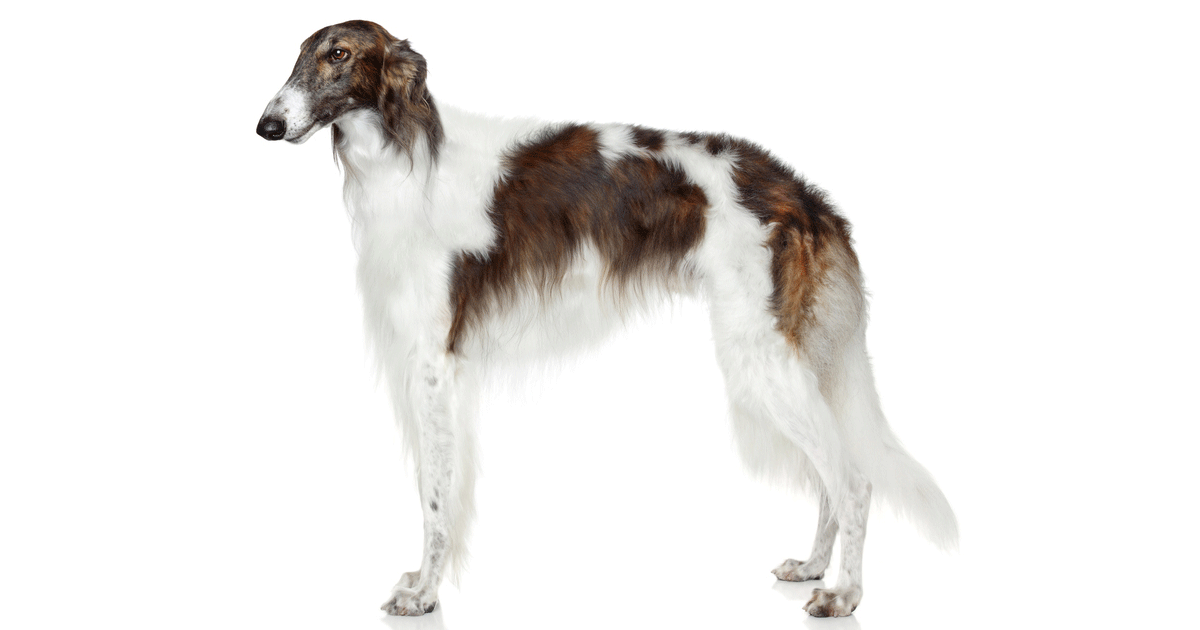 The borzoi, also called the Russian wolfhound, is a breed of domestic dog (Canis lupus familiaris). It is descended from dogs brought to Russia from central Asian countries. It is similar in shape to a greyhound, and is also a member of the sighthound family.

The system by which Russians over the ages named their sighthounds was a series of descriptive terms, not actual names. "Borzói" is the masculine singular form of an archaic Russian adjective that means "fast". "Borzáya sobáka" ("fast dog") is the basic term used by Russians, though "sobáka" is usually dropped. The name "Psovaya" derived from the word Psovina, which means "wavy, silky coat", just as "Hortaya" (as in Hortaya Borzaya) means shorthaired. In Russia today the breed we know as the borzoi is officially known as "Russkaya Psovaya Borzaya". Other Russian sighthound breeds are "Stepnaya Borzaya" (from the steppe), called "Stepnoi"; and "Krimskaya Borzaya" (from the Crimea), called "Krimskoi".

The borzoi is a quiet, but athletic and independent dog. Most borzoi are almost silent, barking only very rarely. They do not have strong territorial drives and cannot be relied on to raise the alarm upon sighting a human intruder. The Borzoi is extremely smart and requires patient, experienced handling. They are gentle and highly sensitive dogs with a natural respect for humans, and as adults they are decorative couch potatoes with remarkably gracious house manners. Borzois should never display dominance or aggression towards people, but will turn aggressive if handled roughly. Typically however, they are rather reserved to strangers but affectionate to their people. Sensitive to invasion of their personal space; this can make them nervous around children unless they are brought up with them from an early age. Despite their size, they adapt very well to suburban life, provided they have a spacious yard and regular opportunities for free exercise.

A common misunderstanding about the intelligence of breeds in the Hound group stems from their independent nature, which conflicts with the frequent confusion between the concepts of "intelligence" and "obedience" in discussions of canine brainpower. Stanley Coren's survey of canine obedience trainers published in The Intelligence of Dogs reported that borzois obeyed the first command less than 25% of the time. Coren's test, however, was by his own admission heavily weighted towards the "obedience" interpretation of intelligence and based on a better understanding of "working" breeds than hounds. Unfortunately, the publicity given to this report has led to unfair denigration of breeds which are under-represented in obedience clubs and poorly understood by the average obedience trainer. "Work" for hound breeds is done out of hearing and often out of sight of the human companion; it is an activity for which the dogs are "released", rather than an activity which is "commanded".

In terms of obedience, borzois are selective learners who quickly become bored with repetitive, apparently pointless, activity, and they can be very stubborn when they are not properly motivated. For example, food rewards, or "baiting", may work well for some individuals, but not all. Nevertheless, borzois are definitely capable of enjoying and performing well in competitive obedience and agility trials with the right kind of training. Like other sighthounds, they are very sensitive and do not cope well with harsh treatment or training based on punishment, and will be extremely unhappy if raised voices and threats are a part of their daily life. However, like any intelligent dog, borzois respond extremely well to the guidance, support, and clear communication of a benevolent human leadership.

Borzois were bred to pursue, or "course", game and have a powerful instinct to chase things that run from them, including cats and small dogs. Built for speed and endurance, they can cover long distances in a very short time. A fully fenced yard is a necessity for maintaining any sighthound. They are highly independent and will range far and wide without containment, with little regard for road traffic. For off-lead exercise, a borzoi needs a very large field or park, either fully fenced or well away from any roads, to ensure its safety.

Borzoi are born with specialized coursing skills, but these are quite different from the dog-fighting instincts seen in some breeds. It is quite common for borzois at play to course (i.e., run down) another dog, seize it by the neck and hold it immobile. Young pups do this with their littermates, trading off as to who is the prey. It is a specific hunting behavior, not a fighting or territorial domination behavior.

Borzoi can be raised very successfully to live with cats and other small animals provided they are introduced to them when they are puppies. Some, however, will possess the hunting instinct to such a degree that they find it impossible not to chase a cat that is moving quickly. The hunting instinct is triggered by movement and much depends on how the cat behaves.