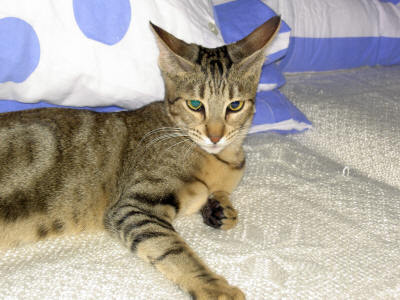 The Sokoke is a more recently developed natural breed of felid hybrid domestic cats, recognized by two major cat pedigree registry organizations as a formal cat breed. It is named after the Arabuko Sokoke, the environment of the Kenyan Khadzonzo landrace it was developed from.

The distinctive, free-roaming feral cats of the Kenya coastal area – found from city streets to the Arabuko Sokoke forest – were "discovered", in the Western cat fancy sense, by horse breeder and wildlife artist Jeni Slater in 1978. This original landrace variety, the defining traits of which the Sokoke breed was later developed to formalize and preserve, was locally named Khadzonzo by the Giriama people of Kenya, who had known of the variety for a considerable time, possibly centuries before the intervention of Western fanciers and breeders. Khadzonzo means 'look like tree bark' in the language of the Giriama; the marbled tabby pattern of its coat (much like the marbled variant of the Bengal) has an appearance reminiscent of tree bark.

The Sokoke does best in a controlled environment, because of their limited resistance to common New World cat illnesses, often found in catteries and multi-cat homes. Like all of the short-haired Asian group of cats, they do not thrive in extreme cold temperatures for extended periods of time.

Their expected lifespan is the same as most purebred domestic cats, with 15 years an average old age.

It is typical for the male to help raise the kittens. If left together, the mother will often wait months to wean her kittens, even though their development is fairly rapid once they leave the nestbox. Breeders expect one to two litters per year, per breeding pair. Sometimes two litters may come closely in a row, with a longer period of time before further reproduction. Sexual maturity is usually reached at around eight to ten months of age.

Check our listings for Kittens for sale here and click on the links to our breeders below to go to their profile page.  You can also click here to search for Registered Sokoke Breeders by location.