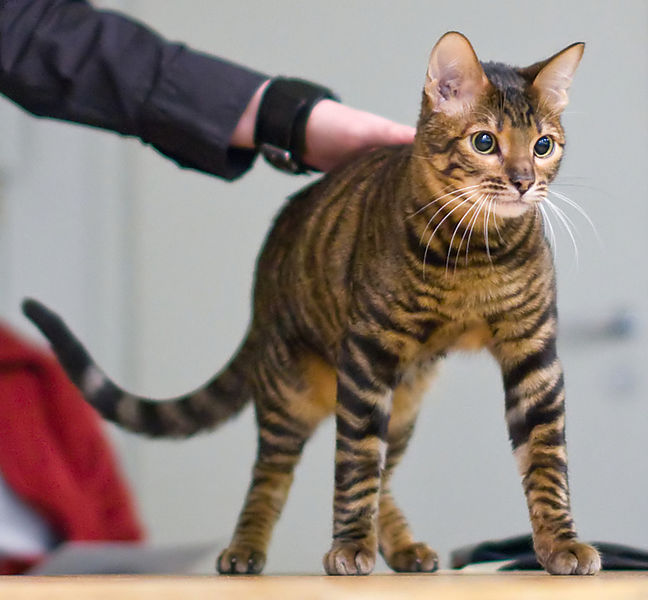 The toyger is a breed of domestic cat, the result of breeding domestic shorthaired tabbies (beginning in the 1980s) to make them resemble a "toy tiger", as its striped coat is reminiscent of the tiger's. The breed's creator, Judy Sugden, has stated that the breed was developed in order to inspire people to care about the conservation of tigers in the wild. It was recognized for "Registration only" by The International Cat Association in the early 1990s, and advanced through all requirements to be accepted as a full Championship breed in 2007. There are now about twenty breeders in the United States and another 15 or so in the rest of the world.

The breed began development in the 1980s when Judy Sugden, a breeder looking to clarify the mackerel markings in tabbies, noticed distinctive markings in one of her cats. These tiny spots occurring on the temples of the face (an area normally devoid of distinct pattern) proved genetically that the circular tiger face pattern could be possible in a domestic cat. After importing a tom from the streets of India with noticeable spotting breaking up the usual tabby lines on the top of the head, the quest to develop a toy-tiger began in earnest. About forty domestic cats from various countries have been carefully selected over the years as founders; each providing the rudiments of a specific desirable trait that could then be expanded with careful breeding.

With the aid of computer imaging, breeders have been able to develop a prospective model for the desired, final look of the breed. In 2010, breeders achieved smaller eyes, stronger chin, and a wider nose tip. Small round ears, whitened chest and stomach with black markings, and a cheek ruff are also breed possibilities for the future.

Check our listings for Kittens for sale here and click on the links to our breeders below to go to their profile page.  You can also click here to search for Registered Toyger Breeders by location.

Cats
My name is Tracie-Anne Kearns, I have a passionate desire to surround myself ... read more
SA
Lasskats - Toyger breeder - Perth WA

Cats
Stringybark Park Cattery is a boutique cattery that is located on the border of ... read more
Albury, NSW