The other day we were out walking the dogs when suddenly we were 2 steps away from a 1.8m red-bellied black snake.   Two weeks before it was a king brown.  There seems to be a lot more snakes around this summer.

Just the day before we'd decided that our regular off lead area was out of bounds because of the very long grass and snake hazard, but even here on a firetrail, we didn’t see the snake until we we’re almost upon it.  They really do look like a fallen eucalypt branch!     Check out this snake.  We were walking along a fire trail near the Molongolo River in Canberra...

I was very grateful that our little Charlie was on a lead - he's not so easy to call back if he sees something interesting and he loves going after lizards.  I also had a million questions...

What would I have done if our Australian Cattle Dog had been bitten?  I can't carry her and we're often 5-6kms from the car, and we can't drive the car into the forest.  What happens if I let her walk, will the venom affect her more quickly, how long do I have etc etc etc...

The recent death of a 24 year old man who was bitten in his backyard while trying to protect his dog should have us educating ourselves about how to prevent and treat snakebite.

Are pets safe from snakes in the backyard?

If you think avoiding walks in the bush will keep your dog safe you might need to think again.  Preliminary (2016/17) data from a new project being run by the University of Melbourne called SnakeMap (more below) indicates that surprisingly, most reported snakebites in dogs (73%) happened in pet owners’ backyards.  "In Melbourne, many pet snakebites happen along the urban fringe in new suburbs, and along waterways such as Skeleton creek in Werribee. In Perth however, it appears snakebites happen in a more scattered pattern across the suburbs'.

The SnakeMap data also showed that one in every four dogs bitten by a snake was a Staffordshire Bull Terrier, and one in 10 a Jack Russell Terrier. Thirty eight other breeds and mixed breeds were also recorded. 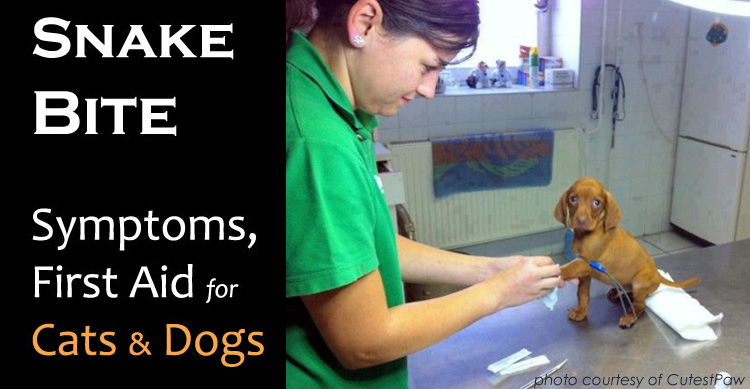 With some of the most venomous snakes in the world, Australian pet owners need to be prepared for snakebite.  After road trauma, snake bite is the most common cause of sudden and violent death in cats and dogs.  Unfortunately deaths by snakebite are expected to increase with longer and hotter summers expected due to climate change, and a shorter winter hibernation season.

More detail below but the upshot is “If your pet is vomiting, has red coloured urine or weakness it may have been bitten by a snake whether you have seen a snake or not. Keep your pet as still as you can and take them straight to a vet. The sooner antivenom is given, the better the recovery...  Dr Keler from the SnakeMap project also gives the advice we 100% agree with after our experience "pet owners should avoid walking dogs off-lead in long grass or bush, especially near waterways."

Has your pet been bitten by a snake?

The reaction your pet will have to the snake bite is influenced by: type of snake; amount of venom injected; and the site of the bite on your pets body.  The closer the bite is to the heart the quicker the venom will spread to the rest of the body.  Venom glands are also fuller at the beginning of summer when their bites are much more severe.  Cats and dogs react differently to snake bites as cats are more resistant to snake venom than dogs.

Death can occur within 30 minutes, depending on the type of snake venom and the amount of venom injected.

In the majority of snake bites, signs of a bite or wound cannot be seen so it's important to know the clinical warning signs. Dogs will usually show signs of snake bite in 1-6 hours.

Early signs of snake bite in dogs include:

Dogs may have these symptoms - even to the point of collapse, and then show a seemingly spontaneous recovery.   Please note that if your dog has shown these signs it almost always means that they've had a lethal dose of venom and will invariably deteriorate again within hours with symptoms including:

Like Dogs, Cats will show signs of instability, but it can take up to 15-24 hours.  Cat’s legs cross over, they become weak and unsteady, go off their food, and their meow may even change.

Early signs of snake bite in cats include:

Please note that these symptoms may be transient and inconsistent but still prove fatal so seek veterinary help ASAP.

If you think your pet has been bitten by a snake, go straight to your local vet or emergency animal hospital and try to stay calm (for your pet's sake - your stress adds to their stress).   If it's not going to slow you down and/or you have to travel a fair distance to the vet, apply a pressure bandage over and around the site of the bite, and carry the pet to the car to slow down the movement of venom to the heart.  Do not wash the wound or use a tourniquet.  Don't try to catch or kill the snake.

Dogs and cats that have been bitten by a snake are usually put on oxygen, and their blood pressure and heart rate are monitored.  The vet will also give anti-venom and intravenous fluids.  If you don’t know the type of snake that bit your dog or cat, don’t panic as there are blood and urine tests that can be used for identification purposes.  Your pet may need to stay at the vet hospital anything from days to weeks depending on the severity of the snake bite.

Approximately 80% of pets survive snake bite if treated quickly.  Recovery can take 24 to 48 hours if treatment is provided quickly and the bite isn’t too severe.  Unfortunately some pets will take much longer to make a full recovery due to damage to internal organs and will require intensive and prolonged care, and pets that aren't treated may die.

Cats that are allowed outdoors will usually hunt and snakes are prey just like birds and other wildlife so keeping them indoors will prevent the risk of being bitten.  If you live in the suburbs or semi-rural areas keep your backyard free of rubbish and long grass. Dogs are more likely to be bitten when they come across snakes, but are less likely to be hunting them.

Dogs are inquisitive by nature so have them on a lead when walking near sand dunes or bushland during summer - especially near water.  If you tend to do long walks in out of the way areas, carry a compression bandage, and have your phone with you in case you need help - especially if you have larger breeds.

If you think your dog or cat has been bitten by a snake, get it to the vet ASAP.  The few minutes you spend at home trying to work out what to do may be the extra time your vet needs to save it's life.

Apart from the stress, and heartache if you lose a pet, be warned that anti-venom and vet care can be very expensive resulting in a large veterinary bill.  SnakeMap data (2016/17) reveals that the average cost of care for animals that were discharged after treatment for snakebite was $2067 AUD (range $124 to $13,786 AUD).

While Australia has some of the worlds most venomous snakes, the Brown Snake that is most often responsible for snakebites and snakebite deaths in both animals and humans. Tiger snakes, found in wetter areas of southern and eastern coastal Australia - especially near water, are the next most common. 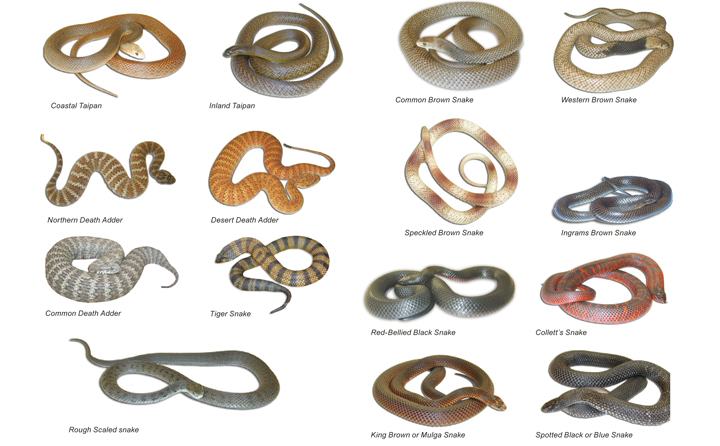 Death Adder -  9th deadliest snake in the world. The venom from the Death adder contains a powerful neurotoxin that will affect the dogs brain and nervous system.  Symptoms will often take longer to show than that of other snakes.

Tiger Snake - 5th most venomous snake in the world.  Tiger snakes are particularly adapted to colder climates, can climb well and are often found in trees, on roofs and fences.  They will usually flatten their neck and raise their head when threatened.

Coastal Taipan (Mainland Taipan) - 3rd deadliest snake in the world.  Before anti-venom was made survival following a taipan bite was rare.  Taipans are considered shy, but aggressive when threatened when they will strike rapidly and repeatedly, delivering larger quantities of venom than other Australian snakes.

Eastern Brown (Common Brown) - 2nd most venomous snake in the world.  The eastern brown is agile, fast moving and formidable to deal with. The venom contains powerful neurotoxins and blood coagulants and brown snakes cause more human deaths in Australia than any other.  When a brown snake is provoked they raise the front part of their body in an “S” shape, mouth open and ready to strike forward.  If your dog is near a brown snake ready to strike it is in serious danger and you must call it back immediately.   Brown snakes pose a serious threat to both large and small dogs.

Inland Taipan (Fierce Snake) - Most venomous snake in the world. The Inland Taipan averages 2 metres in length.  A single bite is enough to kill 100 men - and many more dogs!

Snake Bite in Dogs and Cats

“The SnakeMap project is a not-for profit, volunteer-based initiative, and we would like to look at it as a initiative run by the veterinary community, where veterinary hospitals across the country, small and large, are joining to contribute to new knowledge about a condition that affects so many pets, pet owners and veterinary professionals,” Dr Kelers says.  “Our ultimate aim is to make SnakeMap available to the public so they can have timely, accurate information about what snake species are active in their area, when and where.”