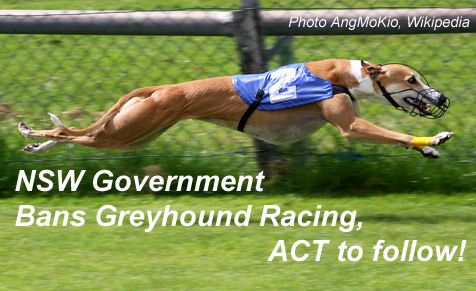 Greyhound racing to be banned in NSW from July 2017 - Hoping this catches on!

Greyhound racing will be banned in New South Wales from 1st July, 2017 with The Premier, Mike Baird saying the "widespread and systemic mistreatment of animals" cannot be tolerated and that the Government was left with "no acceptable course of action except to close this industry down".

The decision follows a damming report and a special commission of inquiry which found overwhelming evidence of animal cruelty, live baiting and mass greyhound killings.  The commision was prompted by the ABC's Four Corners program which exposed widespread and extreme animal cruelty and cheating through the use of live baiting to entice and train greyhounds.  The program also exposed the use of piglets, possums and rabbits as live bait in secret greyhound training sessions.  See Four Corners: Making A Killing.   Internal documents also revealed that senior greyhound racing administrators in NSW were actively strategising to downplay live baiting in the industry in the days before the program was set to air.

The inquiry into the Greyhound Industry found that:

- Since 2004, between 48,000–68,000 dogs were killed because they were unsuitable for racing and/or too slow.
- Approximately 10-20% of trainers use live baiting
- Dog deaths and injuries have been misreported by Greyhound Racing NSW
- The greyhound industry is incapable of reforming in the short or medium term

Greyhound trainers have said that they will fight to the end to stop the ban, with one trainer blaming the ABC for the decision, not Mr Baird.

Help will be needed to rehome greyhounds...

There are 6,809 registered greyhounds in NSW, which will need to be re-homed, transferred interstate or put down, the inquiry found.  New homes can be found for former racing greyhounds following a ban on the sport in New South Wales, dog welfare advocates have said.  Check this list and contact your local Pet Rescue, Dog Rescue, and Greyhound Rescue group if you are able to help or to donate.

Mr Baird described the evidence of animal cruelty heard by the commission as "chilling and horrific".  "As you will see when you go through the report, he has shone the light on an industry that has overseen the slaughter of tens of thousands of healthy dogs whose only crime was they weren't fast enough," Mr Baird said.  He's also shown an industry which has turned a blind eye to the barbaric practice of live baiting. He's shown that the industry has a culture of deception.  "Indeed the commissioner has found that [the greyhound industry] is no longer entitled to the trust of the community."

Queensland -  Racing to continue in Queensland with continued vigilance, Racing Minister says
ACT - The ACT Chief Minister announces sport has 'no future' in the territory
Victoria - The industry is 'on notice' in Victoria but racing will continue, Minister says
Western Australia -  'No plans' to ban racing in 'much-smaller, heavily-regulated' industry, Govt Minister says
Tasmania - The Tasmanian Government awaiting a parliamentary report

"Everything that is going on in NSW is going on nationally and without a national approach to this problem, what we'll see happening is that trainers in NSW will start moving their dogs interstate and racing them interstate," she said.

Animals Australia's Shantha Hamade said other states should follow the lead of NSW, and described the announcement as "a courageous decision in line with the community expectation".

GRNSW has now suspended racing for the next seven days. 'A tough day' for many in the industry.  Racing Minister and Deputy Premier Troy Grant said he was sure that everyone who read the report would be horrified by it, as he was.  He said "No Government wants to close down an industry....but there are too many of those in the industry for financial gain or for whatever other motivation they had, [who] chose to put animal welfare as their least consideration in their own pursuit of profit or what other motivation they had.

Welfare group calls for national ban.  Please share this article if you agree that greyhound racing should be banned Australia wide.