Eradicate the Goats, then Poison the Dingoes

A North Queensland Council is releasing dingoes onto a Great Barrier Reef island to kill feral goats. The dingoes are then being eradicated themselves. It is hoped that the four wild dogs will help save the ecosystem which is being destroyed by feral goats.  According to Hinchinbrook Shire Council, they won't have the chance to become pests themselves, as they have been implanted with a time-activated poison. 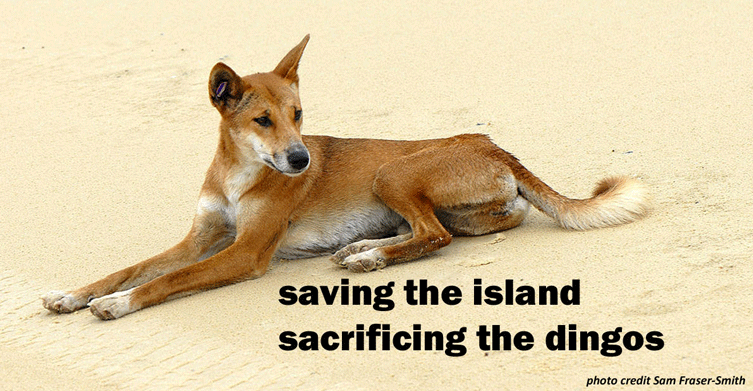 Pelorus Island, about 80 kilometres north of Townsville, supports rare coastal rainforest and 300 goats, which are making a meal out of the endangered habitat.  According to Dominique Schwartz, ABC's national rural and regional correspondent, feral goats are a problem on many islands around Australia, having been released by early European settlers as food for lighthouse keepers and shipwrecked sailors.  Without predators, their numbers have exploded, and millions of dollars have been since spent trying to remove them. apparently nothing has worked to control the goats on Pelorus,  so the council is employing natural-born killers.

Four male dingos, trapped on cattle-and-cane properties around Ingham are being desexed and vaccinated before their island release.  To make sure they don't become entrenched pests themselves, the dingos are also being implanted with a capsule of 1080 poison, timed for release in two years.

Schwarz says that the plan follows lessons learned from a project on Townshend Island 20 years ago where dingos killed the goats, but then evaded death themselves for more than a decade and decimated the local the shore bird population.

"You've got to remember: the whole reason we are doing this is because we are trying to restore this island. The last thing we want to do is create another problem for this island" says Allen.