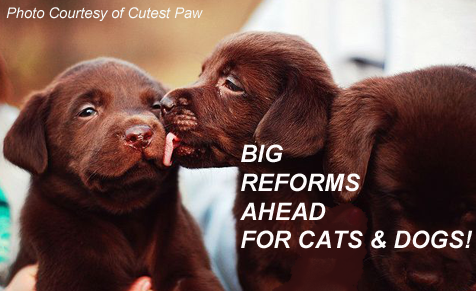 The end of puppy farming is near & a reduction in euthanasia rates expected - A great outcome for all dog and cat lovers in South Australia. July 6, 2016

The end of puppy farming draws closer, and a reduction in the number of unwanted dogs and cats being euthanased is expected with the passing of amendments to the Dog and Cat Management Act in Parliament today.   Amendments to reform South Australia's dog and cat management laws are the latest step in delivering the 2014 election commitments to reform the laws.

Aside from exemptions for breeders, working dogs and security dogs, cats and dogs will soon have to be desexed.  They will also have to be microchipped.  Desexing and microchipping can be deferred by a vet based on health grounds.  Councils have been granted greater powers to administer the Act, and breeder registration requirements are also included in the amendments.   There have also been changes to the training and accreditation of assistance dogs.

The amendments will be phased in during 2017, following public consultation later in 2016.

What are the main changes to the Act?

Bringing an end to puppy farms and reducing numbers of unwanted pets is a great outcome for all dog and cat lovers in South Australia.

There are great benefits from both microchipping and desexing – experience shows lost microchipped animals have a much higher chance of being reunited with their owners, while desexing reduces unwanted litters and behaviours such as aggression and roaming.

These two measures will go a long way to cutting the number of dogs and cats that end up in shelters and the unacceptably high number of unwanted animals euthanised every year.

Most reputable breeders already adhere voluntarily to high standards, but breeder registration will be an important tool allowing us to prosecute puppy farmers and ultimately stamp out this reprehensible practice.

The Dog and Cat Management Board has been a strong advocate for desexing and microchipping for many years, so it is very pleasing to see these become mandatory.

The recent community engagement, including the citizens’ jury, has shown that there is also strong public support for these measures, which we hope will reduce the number of unwanted dogs and cats being needlessly euthanised in South Australia.

The LGA has fully supported the development of this Bill, and we’re pleased the concerns and priorities raised by our sector during consultation have been incorporated into the final version.

Council officers will now have greater investigation and enforcement powers under the Act, which will allow them to better serve their communities.

We also expect the inclusion of mandatory desexing and microchipping will reduce pressure on council pounds, as well as animal shelters.

At this time of important reform for dog and cat management in South Australia, we remain strongly supportive of the Bill for mandatory desexing for all future puppies and kittens to help reduce problem behaviours such as aggression in dogs and nuisance behaviours in cats.

We further welcome the Bill for mandatory microchipping and registration of breeders and Code of Practice for Breeders, which will ensure more positive animal welfare outcomes.

The AWL is very much looking to working in collaboration with the Government and other relevant animal welfare organisations in the future to ensure the success of the Bill.

The Feline Association of SA welcomes the introduction of new legislation designed to assist in educating the public as to the value of cats and kittens, and from whom and how they should be purchased in order to ensure the health and wellbeing of companion animals.