Aussie dogs - the most loved, and the most dumped

Burke’s Backyard and the RSPCA, carried out a research project to compare the number of dogs of each breed surrendered to the RSPCA (2003), with the registrations of births for that breed (2003).  The statistics were Australia-wide (except Tasmania), and while not the most recent figures they still provide some very powerful and surprising insights.

The aim of the exercise was to ascertain a satisfaction rating for each breed. The presumption was that loved or good dogs are less likely to be surrendered to the RSPCA. The RSPCA keeps dumpage figures by breed, as well as the reasons for each dog being dumped. The number of dogs of each breed dumped during 2003 was divided by the number of puppies of that breed bred during 2003.  Breed statistics for 87 breeds were accessed from: Royal Society for the Prevention of Cruelty to Animals, Australian National Kennel Council, Greyhounds Australasia Ltd, and The Working Kelpie Council of Australia Inc.

The research indicates that the Maltese is Australia’s most unsatisfactory dog - the worst barkerand the most aggressive. The Maltese is listed as the most common purebred dog in NSW, yet nationally it is the most dumped purebred dog at RSPCA shelters.  The survey also shows that a sensible buyer would purchase a West Highland White Terrier instead of a Maltese. Both are small, fluffy, white dogs, yet one is heavily dumped and the other isn’t. ‘Westies’ came out really well in our survey. While the Maltese is the most dumped, the West Highland White Terrier is the least dumped.

THE 10 MOST DUMPED DOGS

Two other breeds, the Finnish Spitz and the Foxhound also had extremely high dumpage rates.  They were left off the list due to their very low overall numbers (4 and 11 respectively) which render the statistics questionable. Nonetheless, these breeds remain suspect.

A summary from Don Burke

Without doubt the survey indicates that the Maltese is Australia’s most obnoxious dog: worst barker, most aggressive and most dumped at the RSPCA. The survey also shows that a sensible buyer would purchase a West Highland White Terrier instead of a Maltese. ‘Westies’ came out really well in our survey.

We would recommend against the purchase of a Maremma Sheepdog as a pet. These dogs were bred to live alone with sheep, not with a family. The small sample suggests that they are both noisy and dangerous. Australian Cattle Dogs would be a poor choice also. Many of them make great pets but a lot of them are nasty and many bark too much.

There are so many wonderful dog breeds. Please consult the lists of breeds with dumpage rates of zero, or our 10 least dumped breeds prior to purchasing your dog.  Most breeds came out really well in our survey, so why risk your happiness by selecting from some of the heavily dumped breeds.

Aggression turned out to be the most significant reason for dumpage of dogs when you ignore random causes such as ‘owner moving’, etc. Almost all of the most dumped dogs were commonly dumped for aggression, whereas none of the 20 least-dumped dogs showed a significant problem with aggression.

The three breeds that stood out were the Maremma Sheepdog, Maltese and Australian Cattle Dog. The number of Maremma Sheepdogs was small, so the title for Australia’s most aggressive dog goes to the Maltese. While it might be acceptable for a guard dog to be a little aggressive, it is certainly not acceptable for a lap dog like a Maltese to be aggressive. This raises serious issues about Maltese breeders failing to select for sound temperaments in their dogs. The single West Highland White Terrier dumped was dumped due to its owner’s bad health.

THE 10 BREEDS MOST DUMPED DUE TO AGGRESSION*

* To index aggression we included dumpage due to the following stated reasons: ‘dog aggressive’; ‘dog bites’; ‘dog attacks/fights other dogs or other animals’; ‘dog does not get on with kids’ and ‘dog not trusted’.  Both Maremma Sheepdogs and Irish Wolfhounds were also commonly dumped for aggression, but the sample was small.

A significant number of dogs were dumped due to barking. Again the Maremma tops the list of dogs dumped for barking but the numbers of Maremmas and also the Bearded Collie, the second-worst barker, are rather small so we will just issue a clear warning to watch out for these two. So again, the award for the worst barker goes to the winner of the most aggressive category, the Maltese.

THE 10 BREEDS MOST DUMPED FOR BARKING

Burke’s Backyard spent many months compiling these statistics, nonetheless, as with all surveys, there are possible sources of errors.

1. Breeds may have been mis-identified by their owners or the RSPCA on surrender.
2. Some samples are very small (ie the dogs are rare) leading to the possibility of statistical errors
3. Some purebred dogs may be bred outside of the normal pedigree (ANKC) system, thus they could skew results. Mind you, this could apply equally across all breeds, cancelling itself out.
4. Breeds going out of fashion may be more heavily dumped
5. When dogs are surrendered people may not necessarily state the true reason for dumping them.

6. There were 62 dog breeds not recorded as being dumped at all in 2003 (dog breeds not dumped at all, list above right). These are in many ways the best dogs of all. Everyone loves them. Nonetheless, many of them are very rare and may not even be recognised as purebreds at the time of surrender to the RSPCA.

BEST LOVED OF ALL

There was 11 undumped breeds that had puppy registrations of 100 or more, making them clear favourites.

Most satisfactory, in descending order.

Note that the Maltese is most dumped, while the West Highland White Terrier is the least dumped.  Both are small, fluffy, white dogs.  The reason - aggression.

Any of the breeds listed below have very good credentials as none were recorded as being dumped at all.

If interested in a puppy - please see our dog breed information so that you are well informed about the traits of different breeds, the needs of your puppy, and importantly your adult dog as well.   You will also find a list of ANKC registered dog breeders. 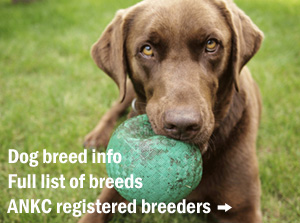