When a dog is a cheetahs best friend

Dogs and cheetahs have become the best of mates in many zoos around the world to help keep orphaned or abandoned captive cheetahs calm and content, because just like us, cheetahs can really benefit from a doggo for a best mate. 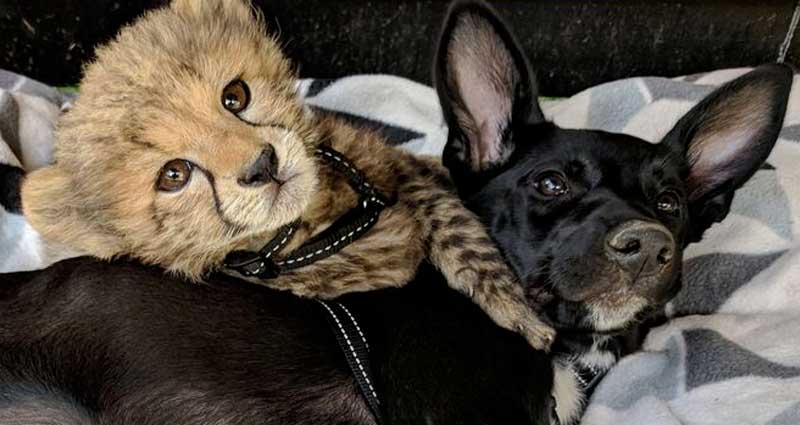 Why are dogs used with cheetahs?

The practice of rearing a young cheetah with a dog companion was first tried in 1976 at Winston Wildlife Safari in Oregon.  Laurie Marker, the curator of the cheetah-breeding program, found herself hand-rearing a lonely cheetah cub and decided to introduce a labrador cross for a playmate.  Since then, the practice of rearing lone cheetah cubs with a canine companion has become a common strategy to support and calm cheetah cubs in Zoos around the world.   The dog and the cheetah cub create a strong bond, and dogs are a fantastic surrogate for cheetah litter mates.

In November 2019, The National Zoo & Aquarium in Canberra celebrated the birth of a cheetah cub. The appropriately named Solo was a rare single-cub birth, as most cheetah litters range from 3 to 5 cubs. As the mothers of single cubs generally have difficulty producing milk for just one cub, Solo was been lovingly hand raised by specialist keepers and received all the love and attention that he would normally have received from his mother and siblings. To make up for Solo’s lack of siblings, the Zoo acquired a similarly aged puppy for Solo to play with. Not every pup can keep up with a wildcat, but Zama, a cross Border Collie/Belgian Malinois, was specially selected so that her collie genes give her the energy and determination to try to keep up with the fastest land animal on earth, while retaining the companionship, loyalty and intelligence of the Malinois genes.

Solo and Zama became best mates and have delighted countless visitors to the zoo with interactive encounters and walks with their keepers through the zoo’s pine forest.  Fundraisers and special events - like Solo and Zamas birthday - have helped the Zoo raise funding for cheetah conservation projects. With less than 7,100 cheetahs left in the wild, the cheetah is Africa’s most endangered big cat which face significant threats to their ongoing survival. Learn more about the National Zoo & Aquariums Conservation Projects >> 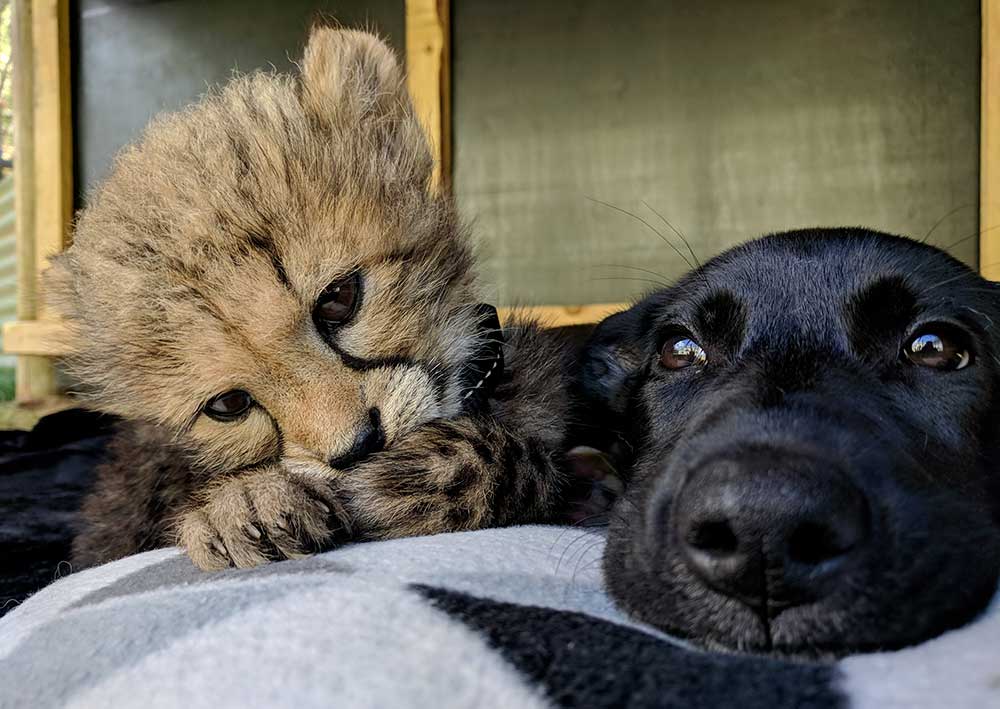 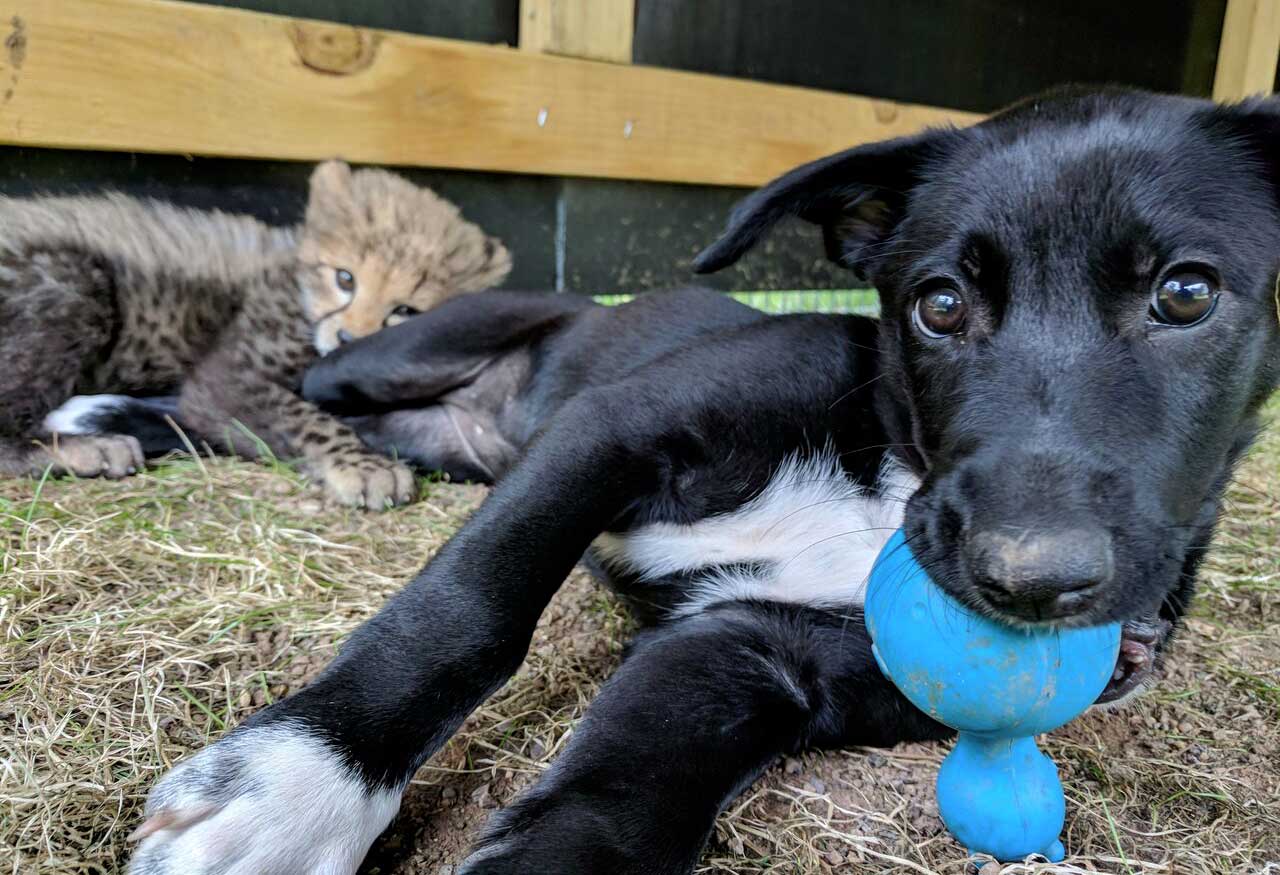 Cheetahs and dogs - what happens in the long run?

The dogs chosen for cheetah companions are usually easy going breeds or crosses that are easy going and friendly.  While the captive cheetah cubs will form strong singular bonds with their companion dog, there will come a time when they no longer need their canine friend.

In the wild, cheetahs are solitary as adults and usually leave their mother at around 18 months, becoming fully independent at 2 years of age.  A similar pattern emerges in cheetahs who have companions in captivity.  In the case of Zama and Solo, whilst Zama was very important to Solo as a cub to be a big sister and playmate, he slowly began to develop his independence. Much like us with our brothers and sisters, the time came when the pair decided it was time to start the next chapters of their lives. If you visit the National Zoo and Aquarium nowadays you'll find Solo happily hanging out with his keepers and guests as an ambassador cat, and Zama has found a forever home being a big sister to a playful puppy with one of the Zoo's staff members! 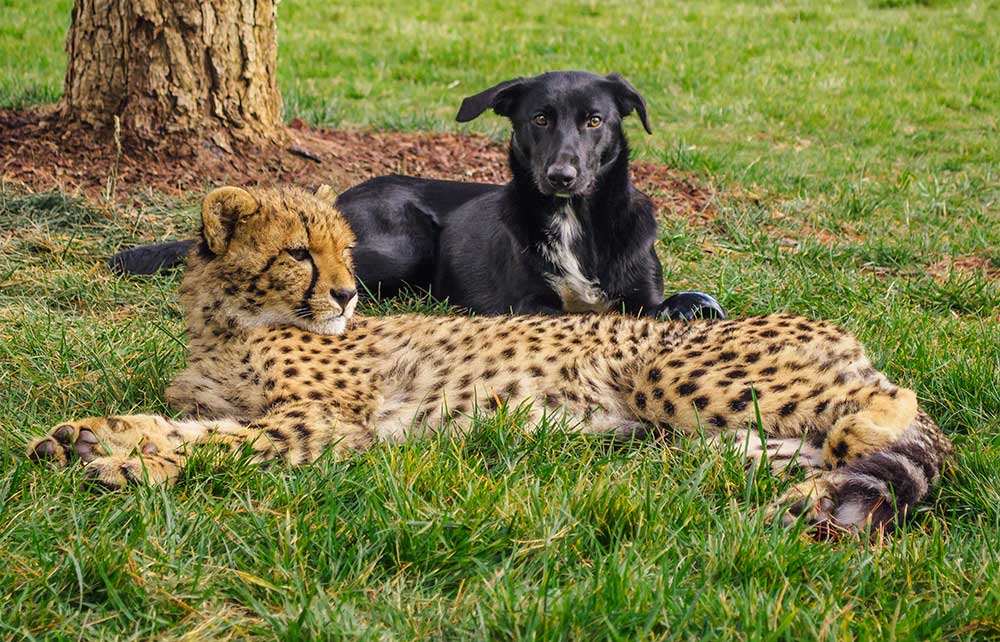 The Cheetah is well known as the fastest of all land animals and can reach speeds of around 100km/per hour. Cheetahs reach this speed in less around three seconds (faster than most ‘super cars’). While cheetahs have incredible speed, they lack endurance. They can only maintain these speeds for around 30 seconds. They then need 30 to 40 minutes to recover. During this recovery period, other predators often steal their catch. Because of this, cheetahs try to hunt when other predators are sleeping. more often in the middle of the day. Cheetah sizes vary and range between 45 and 60kg. Males are usually slightly larger, though it is almost impossible to tell male cheetahs from females, based on their size and weight.

The National Zoo and Aquarium is home to 7 cheetahs: Zingula, Ailsa, Jura, Solo, Viking, Asani and Zambi. The zoo is part of a regional breeding program for Cheetahs. Love Cheetahs?  Check out their Cheetah Experiences here.

Monies raised from animal encounters and Jamala Wildlife Lodge help support a number of local and overseas conservation initiatives and charities. last year alone over $100,000 was donated to these funds Learn more about the National Zoo & Aquariums Conservation Team